Going to the “Talkies” in Spruce Pine 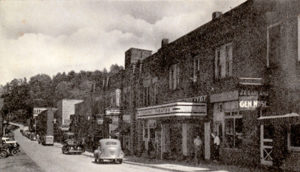 Spruce Pine’s first theater was not the Carolina. The Piedmont Theatre, which was originally located on Lower Street where Dellinger’s Christian Bookstore is today, was opened in 1928 by John Taylor. The theater originally hosted silent movies and featured a large pump organ that provided musical accompaniment. It later switched to “talkies” and served as a stage for dance and music recitals. The Piedmont also hosted fundraisers for the Spruce Pine Band when it traveled to the state competition in Greensboro. On January 1, 1938, the Piedmont closed when its equipment and contracts were purchased by the Cherokee Amusement Company, which had opened the Carolina Theatre just before Christmas in 1937. As part of the sale, Taylor agreed to shutter the business and not operate a playhouse in the vicinity for a period of 10 years. There were several times when folks in Spruce Pine had two theaters to choose from. The Baker Theater on Oak Avenue provided the latest Hollywood films as well. This photo was made in the 1930s, when the Piedmont still had a presence on Lower Street.