Wolves at the Door

In the 1930’s Mrs. Amelia Meares Greenlee asked the students in her classroom to collect stories that told of the “pioneer days” in our community – (Spruce Pine and Grassy Creek.) This is one of the stories which was shared.

This is a story about something which took place in the Kim Thickets, a little over a hundred years ago. (Mid 1800’s.) Today the Kim Thickets is known as Spruce Pine. Back in the woods stood a one-room log cabin with a low wide chimney. A hillside had been dug out for part of the cabin side. The top of the chimney was on that side and one could just about step from the slanting hillside to the chimney.  In this cabin lived Nancy Rose McHone, and her husband Kimbrel, and their small children. At the time of this story, the husband was away from home and his wife did not know just when he would be back. She certainly was not expecting him back on this particular winter night. So she gathered in her wood, and did her evening chores. Perhaps she was a little nervous, but more likely those two small children, one almost a baby, were such good company and kept her so busy that she did not get lonely. Soon after dark, Nancy and the children heard a wolf howling not to far off. Soon it sounded as if there were many wolves and close by! Through a crack they could see their dark forms. It was not unusual to hear a wolf, or to see one or two at a distance now and then, but this many and so near surely made the mother and children afraid. The door was made fast, and none too soon, for the wolves were scratching and trying to come in. Not being able to get in the door, they must have tried coming down the chimney. Nancy stirred the fire and put on wood. The wolves left the chimney. The wood got scarce and she let the fire die down, and as soon as she did, they were scrambling around the chimney again. Nancy then felt sure the wolves would come in if the fire went out. Soon, the last stick of her wood was gone. What was she to do? There was little to decide between and she burned the straw from her mattress, or straw tick, a piece or two of rough furniture, and then some loose pieces of the flooring. Daylight came at last. The wolves disappeared, but Nancy felt they were lurking in the nearby woods. She was afraid to venture forth, and afraid to stay. A little after noonday she took the baby in her arms, and holding the other by their hand ventured forth. With as much haste as possible, under the circumstances, she made her way to the nearest neighbors. Nancy Rose’s next little baby was a boy named Zack. Zach McHone lived to the ripe old age of 96 and most of the years of his colorful life were spent not far from the scene of this story. Uncle Zack, as he was later called, could tell many tales of the early days – of his life in the Confederate Army during the Civil War, and of Reconstruction. But the story of this night when his mother and sisters were in such danger from the wolves is one he especially loved to tell. 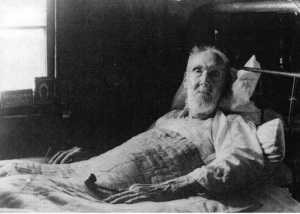 Zachary Taylor McHone, (1844 – 1938) in his later years, at his home on McHone Mountain above Spruce Pine. Zach was one of 10 children born to Kim and Nancy McHone. Zach had 9 sisters. He served in the 58th CSA Regiment during the Civil War.