Bakersville Before and After the May Flood of 1901 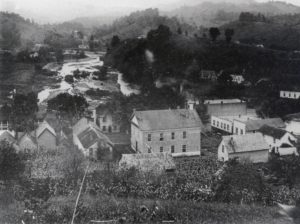 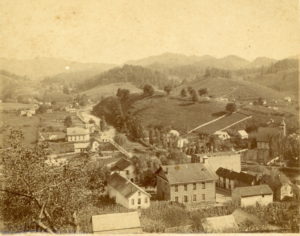 These photos provide a unique comparative look at Bakersville before and after the May Flood of 1901.  We know that the photo on the right was taken before 1906-07 when the Courthouse of 1868, shown in the foreground, was replaced with the current Historic Courthouse.  The church in the middle of the earlier picture was the first Baptist Church constructed in 1869. During the flood, some residents sought refuge in the church, but at the last minute, before it was washed away, they were able to escape. The only part of the Baptist Church recovered was the bell. The houses in the before photo include the Methodist Parsonage, home to the first Methodist minister, G.W. Martin. Another of the

houses was the home of Reverend Stephen Collis, whose influence on church development in the area is legendary. He is buried on a hill far to the left of these pictures, in a cemetery which is in the process of being restored. The home and significant library of Professor James Britt, Editor of the Bakersville Enterprise, was also totally ruined. A long wooden sidewalk can be seen. The church on the right in the pictures was the Methodist Church South which survived but suffered damage; eventually the current brick church was built on that site. Over 24 buildings were completely destroyed, with an estimated value at the time of over $1,000,000. Relief efforts from outside were requested by the Mayor and Town Council.  Thanks to the families of Mary Lee Barron and Robert Lee Blevins for preserving these photographs by unknown photographers.