The Pate Family – 107 Years of Postal Service in Tipton Hill

Three generations of Pates have carried the mail along the roads of Tipton Hill, beginning in 1917 with Uriah Pate.

Mr. Pate first rode a horse and sometimes a mule to deliver mail. One cold winter day, his mule slipped on the ice and pinned him to the ground. He was afraid if the mule struggled it would crush him, so he waited. Someone did come along about dark and found him frozen to the saddle and stirrups but still alive. Later he obtained a surplus Army jeep and drove one until 1947. 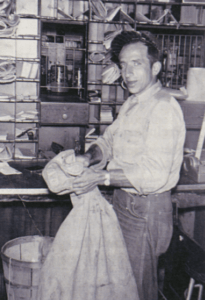 Mr. Pate’s son, Eston Lee Pate, took over the route in 1947 and, except for 3 years in the Navy, continued until 1988. The story goes that he had a pretty heavy foot on the gas with his 1955 Chevy and really churned up clouds of dust on the gravel roads. Once asked if that much dust didn’t bother him, he claimed that he could always outrun the cloud behind him. He managed to do that until one day a customer stopped him for a money order! In the winter, Eston put chains on all 4 wheels and was known to go in snow so deep it would stall his engine. 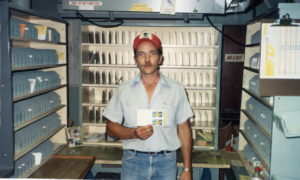 Steven was always a careful driver; however, one day he reached down to get a bundle of mail off the floor and when he looked back up, he was going over a bank. The car rolled over, crushed the top, and then rolled right over to land on 4 wheels again. It took him a while to get all the mail back in the car, which he drove back to the post office where he hid it. He called his wife to bring him another vehicle; she did so, and he finished his route for the day.

Thanks to Phillip Pate for helping to tell the story of his family and for sharing his photos.