A Gouge Clan of Glen Ayre 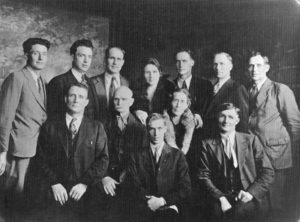 Sometime in the 1930s, William H. and Louisa Emma Gouge, of Glen Ayre, were photographed surrounded by their 9 sons and 1 daughter.  William Gouge (1860-1938) was the son of Wiley and Millie Greene Gouge; his wife Louisa Emma Hughes (1865-1952), was the daughter of William Hughes and Esther Young.

Family members recall a bit about some of the Gouge brothers.  Wiley and Ratha moved to Oregon, while Avery moved to Robbinsville, NC, and was a cook there.  Kary worked for the Clinchfield Railroad, and Essie taught school.  Both Herbie and Bill farmed, Herbie on Roan Mountain and Bill on a Dairy Farm.

The photo was provided by Anne and Phil Castro; Phil is the grandson of Herbie Gouge.