A.W. Sullins, born 1825 in Rutherford County, NC, was the son of Jesse and Catherine Eaves Sullins.  He married Susan Harmon, and they had 4 children prior to her death about 1860.  Leaving the children with their maternal grandparents, Sullins moved to Mitchell County.  He boarded for a time on Grassy Creek, then enlisted in Company A of the 58thNC Regiment.

When the Civil War ended, he brought his three older children up the mountain, and they married in Mitchell County.  Margaret (1849-1937) married 1stRobert Freeman and 2ndMerritt Pendley; Mary Jane (1855-1949) married 1stHenry Gunter and 2ndZeb Pendley.  Son Andew Spencer Sullins married Rachel Carpenter, but as she remarried a few years later, Spencer either died young or, as one family tradition holds, moved to Alabama. 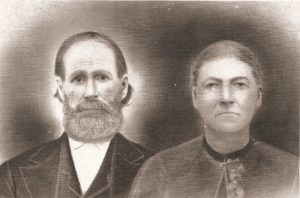 Sullins Branch, just outside Spruce Pine, was named for A.W. Sullins, and he and his second wife, Elmira Wiseman, are buried in the Sullins Branch Cemetery.