Hernando DeSoto Visited Mitchell County in May of 1540 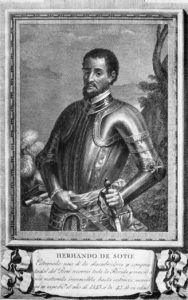 Hernando De Soto is believed to have been the first European to have traveled into the interior of what is now the United States. Seeking gold, his journey began in Florida in 1539 with over 600 men, 200 horses, many dogs, and several hundred pigs. In 1540 he came into today’s South Carolina. Near what is now Camden, he was given a large piece of mica by the woman tribe leader known as the Lady Cofitachequi. He took her prisoner and traveled on toward the mountains of North Carolina from which the mica is believed to have been mined. On May 21sthe arrived at Joara near present day Worry a bit southwest of Morganton. He traveled on, perhaps coming up an Indian path today named Pepper’s Creek Road. We know he camped on May 26thnear Ingalls where the Lady Cofitachequi escaped. From there he traveled along another Indian path probably following today’s 19E and then 226 to camp again at Webb near Relief. Most likely, he and his men stopped by the Sink Hole Mine along the way. From Webb he went along the Nolichucky to Erwin known then by the Indian name, Guaxule. De Soto died of a fever two years later along the banks of the Mississippi. Rather fitting since there were about 50,000 people living in the lands of North Carolina in 1540 and between 20 and 90 million people living in the area of the United States. Diseases, some of which may have come from the pigs De Soto brought, reduced the indigenous population in 1700 to between 2 and 19 million people. There is lots more to the story, but thanks to Dr. Robin Beck Jr.’s research using a 1994 translation of his private secretary, Rodrigo Rangel’s journal we are well assured that 478 years ago this month De Soto visited Mitchell County. For additional information and the opportunity for an exciting visit, go to https://exploringjoara.org/.