The Story of the Spruce Pine Depots 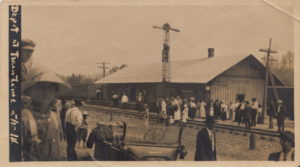 With all the excitement of the exterior renovation of the Spruce Pine Depot, we thought we would take a look back at the history behind the two depots that have existed in Spruce Pine. The South & Western Railroad, the forerunner of the Clinchfield Railroad, arrived in 1903 to an area across the Toe River from the English Inn. (At that time, the English Inn was the center of the community.) A depot was constructed, as seen in the above picture, and a town began to spring up as construction crews started the arduous task of getting the rail line down the Blue Ridge escarpment at Altapass. By the time that the railway made its way to Marion, Spruce Pine had burgeoned into a sizeable town and became the center of commerce for the Tri-County area. During the 1920’s, because of the increased railroad traffic, both passenger and freight, a larger depot was desperately needed. In 1923, the Clinchfield Railroad drew up plans for a modern depot that was built within feet of the older 1903 depot. It was opened by 1924. One could board the train in Spruce Pine and ride to Johnson City, Tennessee, or just to Penland or Altapass and back on the same day. This modern depot would serve the region with passenger service until the 1950’s, and continues to serve the community as a freight depot and an office for the current CSX Transportation. We are grateful to CSX for the renovation of the historic 1923 depot! 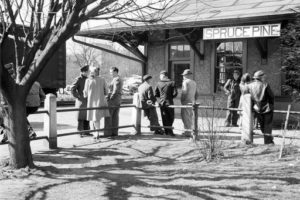 The Spruce Pine Depot pictured in the 1940’s at the before passenger service was discontinued in the 1950’s.