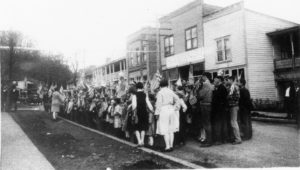 Armistice Day Parade in Bakersville circa 1924.

In federal legislation passed in 1938, November 11 became a legal holiday to veterans of the Great War, “dedicated to the cause of world peace and to be hereafter celebrated and known as ‘Armistice Day.’”

After the Second World War and the Korean Conflict, of course, the nation had many more war veterans to honor.  In 1954, Congress amended 1938 act by replacing the word “Armistice” with the word “Veterans” in the name of the holiday, which has since become a day not for all who have served in our nation’s military.

Although Armistice Day did not become an official national holiday until 1938, many communities around the country were already holding annual celebrations to mark the Armistice, including the one pictured here, in Bakersville, NC, in 1924 or 1925.

The photo is from the collection of Mary Lee Barron, who is “the little girl with the bright blond hair in the front row” according to her son, Dr. Daniel Barron, who provided the photo to MCHS.