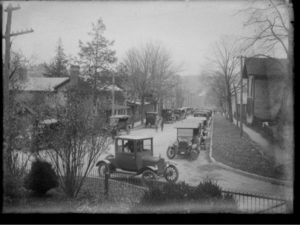 The story begins a little before this picture was taken in the early 1920’s by Jim Jones from the porch of the Young Hotel in Bakersville. In 1974, the Northwestern Bank built on the property where the 2 houses on the left side of the picture appear. That later became the current United Community Bank.

Several Bakersville United Community Bank staff and one customer told a member of the Historical Society that they had seen a ghostly figure on several separate occasions in the lobby and vault area of the bank. Often beginning with: “You may think I’m crazy, but…” Psychic investigators suggest that when a building in which a spirit resides is torn down, many times the spirit prefers to remain in that general location. Such could be the case in Bakersville. Researching deeds, historic photographs by Jim Jones, and a Robert Lee Blevins Family photo collection a possible candidate has emerged. 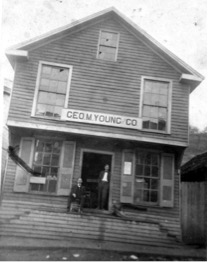 Reuben Young, proprietor of the Young Hotel, had a son, George Martin Young, whose wife was Ella Maria Bailey. George and Ella had a son, Willard Bailey Young, who became a partner in his father’s store shown in the picture across the street from the home of Mrs. Alice Greene Blevins.