In 1947, Frank Griffith (1922-2012) and Farrell Tipton (1909-1977) became partners in a general store at Tipton Hill.  Frank and Farrell were brothers-in-law; Farrell was married to Frank’s sister Blanche.  The two men purchased the store from Joseph Tipton, Frank’s great uncle. 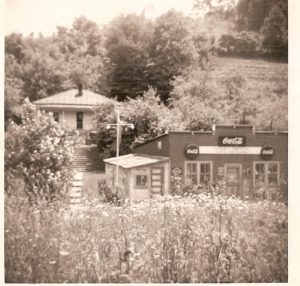 Farrell and Frank were already in business together, transporting produce grown by local farmers to canneries or other businesses in East Tennessee.  The problem with being peddlers, however, was that it was seasonal work, and the two men wanted steadier business; they thought “a local store in a permanent building might be our best bet.”   Griffith shared the story of their venture in an interview with Elizabeth Hunter, author of Voices of the Valley, the fine history of Mitchell County’s 150 years.

“Permanent” is a fair description for the Tipton Hill store that began as Tipton & Griffith.  After Farrell Tipton’s retirement, Jerry Griffith, Frank’s son, became the new partner in the venture.  And Jerry’s son David is now the third generation of Griffiths to be in the general store business.

The building pictured here was torn down after 1955, when Griffith and Tipton built a new store right next to the old one.  The partners continued to sell “dry goods and a lot of groceries, chemicals, fertilizer, seeds, and all kinds of farm supplies,” Frank told Hunter, and not only to local folks.  Customers come from all over the tri-county area and from Tennessee, as well.  And even after automobiles and better roads meant Tipton Hill residents can get to Spruce Pine or Johnson City more easily, they still rely on Griffith’s General Store to supply many of their needs.