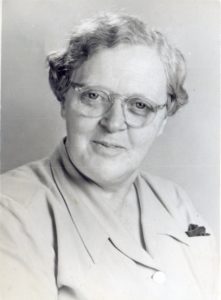 A great deal of gratitude is owed to the older generations of local residents who collected artifacts that would otherwise be long gone today. Having pictures of one’s family, significant buildings, or events in the community were and are still treasured possessions. One of those collectors was Spruce Pine native Mrs. Ruby Wiseman Deyton. Mrs. Deyton’s family roots lie deep in the Toe River Valley. Her mother was Illia English, the daughter of Isaac and Alice Rowe English, who were the proprietors of the English Inn. Her father was William Wiseman, also known as “whistling Will” who was a direct decedent of “Old Will” Wiseman, one of the first settlers here after the Revolutionary War. Mrs. Ruby was born in September of 1902 and died in November of 1981. She attended Berea College in Kentucky and the University of North Carolina – Chapel Hill. After graduating she returned to teach in the schools of her mountain home.  Many will remember her as their teacher in third or fourth grade at one of the one-room schools in the community or at Harris Elementary. Her grandson’s memoir of his grandmother reads like this:

She had bad arthritis, always was in a chair she moved with her feet.

Her peach and apple jelly was great.

She dried snap beans and made “leather Britches”

She always saved me pennies 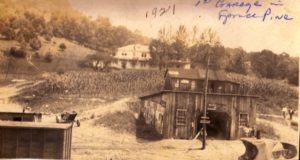 Her legacy lives on not only through the memories of her family, but also through the collection of photographs she assembled over the years. Several times a year, an old picture would appear in the Tri-County News. After the picture description would be the by-line: from the collection of Mrs. Ruby Wiseman Deyton. One such picture is shown here as she has written ‘the first garage in Spruce Pine – 1921”. The garage sat on Lower Street. It wasn’t a very large building, because you could probably count on two hands the number of “autymobiles” there were in Spruce Pine at the time. The large white house was the Taylor Phillips Hotel (which would later become the Topliff Hotel on Upper Street.) For perspective, this picture was taken from near the railroad tracks. The main businesses of Lower Street would be to the right of this garage. One will also notice the nice corn patch between Lower Street and Upper Street.