Magnetic City and Wilder’s Forge were the original names of this community on Big Rock Creek in northern Mitchell County. The name Magnetic City comes from the story that when the survey lines were being conducted for the boundary of North Carolina and Tennessee, the compasses became deflected because of the large deposits of magnetized ore in the area. The name Wilder’s Forge comes from Union General Thomas Wilder, the builder of the Cloudland Hotel on nearby Roan Mountain, who made his fortune in iron. The present name of the community comes from the first postmaster’s daughter whose name was Beulah Dean. 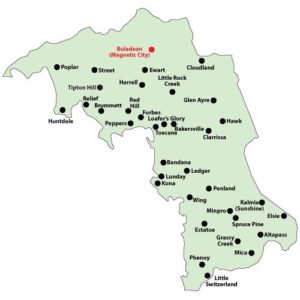