Courting – A Century Ago 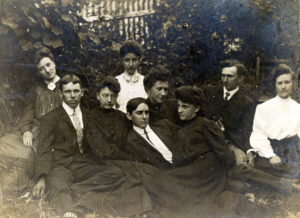 Valentine’s Day brings our attention to love and romance – a century ago!  In the early 1900s, before the advent of automobiles and movie theaters and restaurants, “dating” as we know it didn’t exist.  Instead, a couple would often join other friends in a group outing.  Carrie Young McKinney, born in 1903, frequently spoke of her friends getting together to go up on Roan Mountain to walk and picnic.  There are photos showing her, her beau, and another couple climbing a rocky slope.  And they didn’t wear sneakers and shorts; the men are in suits and the women in long skirts!

Carrie also spoke of the fun to be had when young people in the neighborhood gathered at a friend’s house for a “candy pull.”  They would cook sugar in water and vinegar until it reached “hard ball” stage.  It was poured out on a greased board, and Carrie and her friends might add peppermint or other flavoring.  With hands coated in butter to keep the hot taffy from sticking and burning, they would pull the “stewed sugar” into ropes and then cut it into lengths for eating. She said they never waited long enough for it to cool and so always got singed!

Music was sometimes part of a group date, in singing schools or especially at Christmas when young people went caroling.  Making music in some families was a tradition, and the children’s friends and significant others were often drawn into the musical setting.  However, for some tee-totaller church-going folks, instruments like fiddles and banjos might be frowned upon because they were associated with drinking alcohol.

Courtship often centered around church activities. A girl might be w

alked home from church services by a prospective beau.  If he was favored, he could be asked to join the family for a meal.  As the courtship advanced, he might be able to visit at other times and sit out on the porch with his lady love.  When colder weather forced them inside, a suitor had to be careful not to outstay his welcome.  Some mountain homes had parlors for the courting couple to retreat to, but in small homes, the common area might be separated from the sleeping areas only by curtains, so the pair had little privacy.