Stylish Clothing for Mitchell County Boys One Hundred Years Ago 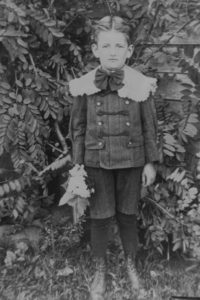 Ernest McKinney was born April 6, 1903, in the McKinney Cove.  He was the son of William Alfonso “Fonzer” McKinney (1877-1963) and Maggie Wilson McKinney (1881-1916.)  In one of these photos he is with his parents, while the other pic shows him about age 8.  You may note Ernest’s clothing in each photo; he’s in a dress as a toddler and in a very fancy outfit when he’s a few years older.

According to Vogue magazine in 1900, little boys up to 6 months were to be kept in long dresses that would cover their feet and short dresses or “frocks” though their toddler years, or until they were reliably potty trained.  Zippers didn’t show up in children’s clothing until about 1930, and buttons or other fasteners were awkward and took considerable time to undo while changing diapers, so both girls and boys wore dresses.

Then for several years, little boys would wear knee pants – sometimes called knickers – and tunics or blouses.  They would be “breeched” or put into long trousers when they were closer to puberty.  It was an important milestone for a boy, signifying he was entering the world of men.

The older Ernest wears a fashionable double-breasted jacket with matching knickers, lace collar, and silk bow.  The outfit was made for him by his aunt, Melissa McKinney Young, who was a talented seamstress and made clothing for the whole clan.  Note also Ernest’s long stockings.  This style of clothing was sometimes referred to a Fauntleroy suit, becoming fashionable after publication in 1885 of Frances Hodgson Burnett’s book Little Lord Fauntleroy.

His cousin Carrie Jane Young, also born 1903, remembered that Ernest’s health was always “delicate,” and he could not always play with the other children.  Young Ernest died August 15, 1920, and is buried in McKinney Cove Baptist Cemetery. 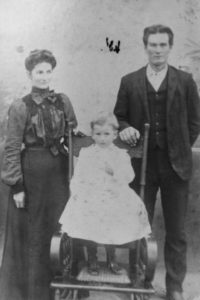 His parents had also lost their other children, Thelma (1901-1909) and Addie Jane (1914-1915).  Their mother Maggie died a year after the death of Addie Jane, at just 35 years of age.  Fonzer married again, but the only child born to him and Nora Buchanan died at birth. Infant and child mortality, unfortunately, was much higher a century ago.