The Civil War – A Series of Three Stories 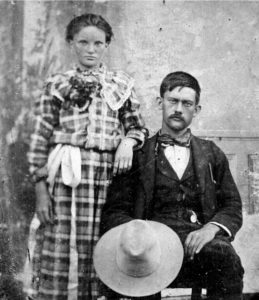 William (1839-1903) and Nancy DeWeese Buchanan (1842-1935) pose on their wedding day, November 11, 1860. William was a Confederate veteran of the Civil War who taught school before entering the war. He was wounded in Virginia, but upon returning home began teaching again continuing until 1897, just 6 years before he died.

Most of us have heard of an ancestor who fought in the War Between the States. Farther south people call it the War of Great Unpleasantness. Most from the northern states call it The Civil War. This is a good time to look back and gain an understanding why young men from our area had to think long and hard on which side they would fight. But fight they did and this is the story I want to tell.

We take it for granted that they would fight for the South but not all did. Our people who settled here probably had a father or grandfather who fought the English, both in The Revolutionary War and/or the War of 1812. They were taught to value our hard won freedom and their young country. When the Union was torn in 1861, 85 years had passed but families still valued it. Here in our part of the world we ‘didn’t have a bone to pick’ with slave owners. So when Lincoln called for troops from North Carolina, family’s had to decide. Some did go north but many went to Raleigh and signed on to fight for the Confederacy.

Much has been written about this period. There are official records of North Carolina Troops in our local libraries. You can find records of ancestors showing his regiment, the county he came from, and the date he entered service. It will also tell of his wounds or death, which battle he was in at that time and when he left the war. You can then read about the battles where his regiment participated. I have done this and found information about my great-grandfather, two of his brothers, and one of his close friends. Fortunately, some of my great-grandfather’s letters have survived which helped tell his story. I have written about these people in a book, “Lifted To The Shoulders Of A Mountain” and it is available in stores in Spruce Pine and Little Switzerland. It is also in our local libraries.

We are aware of the distance between here and Raleigh. Did they walk or ride? If they rode a horse, it would be sold, because they would walk for the duration of the war. This would be a long walk, since these four men were to be part of The Northern Army of Virginia. My great-grandfather’s first post was Prince William’s County, Virginia, guarding the Potomac River, keeping boats from traveling south, according to a letter dated January 26, 1862.

The story will continue as the war and those left behind go on.

Deep in the Civil War

Our local boys mostly fought to protect Richmond, Virginia, where the Confederate President, Jeff Davis, resided as of the end of May, 1861.This was after their long trek to the Potomac River hoping to keep the Northern Troops from advancing south. The letters my great-grandfather wrote told of the long marches and days spent in battle. He didn’t mention the lack of clothes, food, or the weather. Their commanders brought these conditions to the attention of local people.

Col. J. S. McElroy of the 16thNorth Carolina wrote the editor of the Asheville News from their camp near Orange Court House, Virginia. The troops had just completed a march of eight days “through the most mountainous portion in Virginia, and a great many of this regiment, as well as others, have marched the entire distance barefooted.” This letter was dated November 29, 1862. In August they had “opened the ball at Manassas” according to John M. Carver, O. S.

In 1897, James Reid Cole, of Dallas, Texas wrote ‘The Life of Lieut. Col. C. C. Cole.’ He told of the retreat to Richmond from Yorktown. “The 22ndNorth Carolina Regiment suffered severely, part of the time subsisting on parched corn. Not long after its arrival, the battle of Seven Pines was fought and the musketry fire into which they rushed was considered, by Capt. Cole, the severest of the war up to Chancellorsville.”

“It rained immensely. Our regiment marched about eight miles that morning, nearly half the time at double quick. We halted and rested about two hours then were ordered up at double quick two miles to the line. We reached the field about five o’clock. Our regiment went into the rise with four hundred and collected together that night and next morning about two hundred.” This was the battle where my great-grandfather was wounded and his close friend was killed.

Captain Cole related that “The suffering of officers and men during and after this battle  was great. Fatigue, labor, rains, and want of rations caused them to fall frequently attempting to perform their duty, or stagger along from excessive weakness and illness. This battle took place in May of 1862. The war was just beginning.

Back home, my great-grandmother had given birth to a daughter September 6, 1861.  Married November 11, 1860, her husband left to fight a war July 4, 1861. She and others like her would manage the home and children alone. One letter from her husband told her to raise as many hogs as she could since they would always sell high. According to Bill Sharpe (A New Geography of North Carolina) writing about Mitchell County during this time, “The region teemed with deserters, and Colonel George W. Kirk finally controlled the Valley.” Keeping your hard won supplies would be difficult. My great-grandmother told of walking with her baby to spend the night with her sister. When she returned her home had been ransacked. Someone had taken her meat, corn, salt, and all her thread. The thread was ready to put in the loom. The letters will continue.

Soldiers of the Civil War

‘Dear wife, With pleasure I seat myself this morning to write you a few lines to let you know that I am still in the land of the living though I have been very much fatigued and worn out owing to a long march and fighting. We have been marching and fighting about 25 days and from appearances it is not done with yet. The Army is all moving down near Richmond where I look for some more hard fighting. We are now 8 or10 miles from Richmond. I think the army will go very near there before the battle is ended.’

There is an indication that my great-grandfather laid this letter aside and started writing again at a later time. He continues: ‘I am sorry to inform you that brother Alford was killed last Monday in the fight that took place near here. I was not in that battle myself.’

This was the Battle of the North Anna River near Hanover Junction rail center lasting from May 21-26, 1864.

The 16thand 22ndNorth Carolina were only two of many North Carolina regiments that fought in these battles above and around Richmond, Virginia during this time. I have letters mentioning Spotsylvania Court House, from line of Battle, near Hanover Junction, and the letter written from near Mechanicsville. The Northern Army of Virginia had a great number of North Carolina soldiers. A record number of those soldiers died from illness, starvation, and a bullet. It is understandable reading of the lack of food and proper clothing even in the early years of this war. It seems that the South not only had few factories but also lacked a good rail system to supply their troops.

According to Wikipedia, (the free encyclopedia) “rail lines usually connected ports and river terminals to points inland during the war. This caused many railroads to become useless once the Union blockage was in place.” Another problem was “much of the Confederate rail network was in the broad gauge format, however, much of North Carolina and Virginia had standard gauge lines. Rail lines terminated in towns with no connecting lines, railroad supplies were limited and by 1864, in spite of the Confederate Government taking control, the railroad system was always on the verge of collapse.”

My great-grandfather and one of his brothers came home from this war. According to my great-grandmother, “He left a young, healthy man. When he returned, his health and his youth were gone.” He had been a teacher before going to war and he returned to teaching and farming. They had nine children. Two died from a fever before they were six years old. Two grew to adulthood but died young; one always on crutches and another that needed to be carried like a child. One fell from a railroad trestle and another died from a knife wound, all leaving a family behind. My grandmother and two other siblings were the lucky ones who raised their families and lived to an old age. My great-grandfather died at age 64 and my great-grandmother died when she was 93. Because he came home all those years ago, my family came to be. It is a good thing to pay tribute to those who fought this war, both for the South and the North.