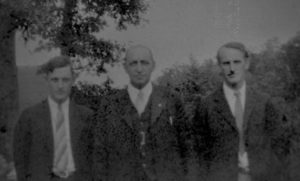 This photograph, believed to have been taken in the late 1930s, shows 3 Baptist preachers significant in Mitchell County in the first half of the 20th century. Left to right, the men are Rev. Charlie Carpenter, Rev. Julius Henline, and Rev. Molton Buchanan.

Julius Henline, born 6/12/1885, was the son of James Washington and Rachel Matilda Carpenter Henline.  He married Cordelia Alice Buchanan, and they were the parents of 8 children.  Rev. Henline died 6/7/1962.  During his long ministry, he pastored many churches, including Bakersville Baptist, Beaver Creek, Spruce Pine First Baptist, Pine Branch, and Roan Mountain.  The history of Bakersville Baptist reveals that, “He prided himself on never staying at any one church for too long a time.”  He also held revivals at over 50 different churches.

Molton Buchanan was born 8/10/1886 and died 3/19/1985, the son of John and Martha Sparks Buchanan.  He and his wife Magnolia “Nola” Pitman were the parents of 7 children.  He served as the pastor of several churches in Mitchell County, including Bear Creek and Pine Branch Baptist Churches.  Rev. Buchanan, it is written, “was the outstanding influence in the movement to establish a church in the Pine Branch community.”

Along with Methodists, Baptists were the first denomination to proliferate in what would become Mitchell County.  Numbers of Baptist churches, however, quickly surpassed Methodist. While Methodist churches included on the online Church Directory for Mitchell County may be counted on one hand, the Directory lists 69 Baptist Churches.  They range from large to small, from Missionary or Freewill to those associated with the Southern Baptist Convention.