Spruce Pine Esso on the Corner of Greenwood and Highland 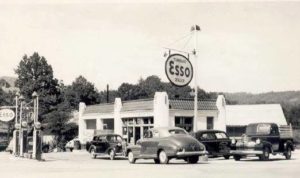 The building in the photograph was on the corner of Greenwood Road and Highland Avenue, just across from Town Hall, according to Max L. Gouge (1926-2015), who made notes and drew a map on the reverse of the photo.  His notes state that the original Esso Station in Spruce Pine was a wooden structure.

Gouge wrote about his memories, as a boy of 8-10, of his father, Lindsey Gouge (1895-1977), purchasing his gasoline at the Esso Station.  The elder Gouge owned Gouge Plumbing and Heating “just down the street on the left.”  After his service in the Korean Conflict and graduation from Lees McRae College, Max Gouge worked in his fathers’ business for a while, and then founded Gouge Gas and Appliance in 1959.

The name Esso came from the phonetic pronunciation of S.O. – Standard Oil, a company established by John D. Rockefeller in 1870.  By 1972, the name Esso had pretty much been replaced by Exxon, as part of ExxonMobil.