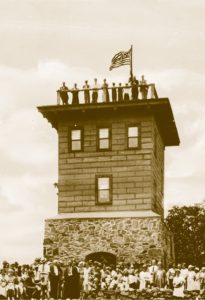 July 4, 1935 Celebration at the Kilmichael Tower atop Grassy Knob In Little Switzerland at an altitude of 4,000 feet.

Judge Heriot Clarkson of Charlotte and his family were the developers of the resort community of Little Switzerland in 1910. The community between Grassy Mountain and Chestnut Ridge had been settled by several generations of hardy pioneers by the time Clarkson arrived with his plans of building a mountaintop paradise. He envisioned a respite from the summer’s heat from the lowlands of the piedmont combined with extraordinary scenery. When Clarkson bought 1,100 acres of land for his development, the company was named at the suggestion of Miss Anna Twelvetrees, who upon hearing a description of the property, declared it to be like the Jura Mountains in Switzerland. Kilmichael Tower, atop Grassy Mountain, was one of the attractions built by the Clarkson Family and Switzerland Company in the 1930’s as a gathering place for the community and  as a tourist attraction. Constructed out of native stone laid by Fate McKinney and other family members, who were aided by oxen Pete and Repete, it featured 360 degrees, panoramic views of the mountains. To the west arose Mount Mitchell and the Black Mountains; to the south, Linville Mountain, the South Mountains, Turkey Cove and the Catawba River valley; in the east were views of Table Rock, Hawksbill, and Grandfather Mountains; and in the north was Roan Mountain. The Tower held plaques honoring Judge Clarkson and the men and women from Little Switzerland who served in World War II. By the 1960’s, it fell into disrepair, the wooden upper section collapsing. The plaques were removed and placed on a stone structure next to the Church of the Resurrection. (Today the plaques rest upon a monument in front of Chestnut Grove Baptist Church). The base was restored in the 1980s as a cottage. The Tower was named after the Clarkson family’s ancestral holdings in Scotland – Kilmichael which means Church of Michael.