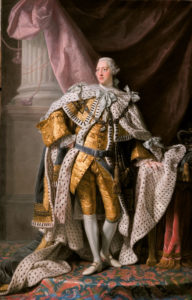 In September, 1780, a ragtag group of backwoodsmen from what is today North Carolina, South Carolina, Tennessee, and Virginia assembled to begin a journey to defend their homes and belief in liberty. They met their destiny at Kings Mountain and this is their story. The Mitchell County Historical Society presents Footsteps for Freedom: The Road to Kings Mountain. Episode Four: King George The Third.

While there were many individuals, groups, and policies that led to the American Revolution, the figurehead that many pin the strife to for starting the war would be King George the Third, also known as George William Frederick. He ruled England from October 25, 1760 until January 1, 1801, after which he became the King of the United Kingdom of Great Britain and Ireland until his death on January 29, 1820.

George the Third ruled Britain for longer than any of his predecessors, and his reign was marked with several military conflicts, including the French and Indian War, the American Revolution, and the War of 1812 in North America. His military forces also engaged France in Europe and saw conflict in Africa, South America, and Asia. Notably, he was on the throne when Napoleon and France were defeated at the Battle of Waterloo in 1815. He apparently struggled with illness at the end of his reign, with his son, George the Fourth, serving as Prince Regent and ruling the kingdom on a day-to-day basis from 1811 until his death.

Interestingly George the Third’s wife was Princess Charlotte of Mecklenburg-Strelitz from Germany, whom he married on September 8, 1761, at the beginning of his reign and just 6 hours after she arrived in England. She spoke no English, but quickly learned after becoming Queen. Her name later adorned a North Carolina county (Mecklenburg) and its county seat of Charlotte (known today as the Queen City).

While George the Third was initially popular among the colonists, their support began to wane when the King would not stand up against Parliament’s efforts to tax the colonies without representation. In fact, Lord North, the prime minister whom George tasked with settling discontent in America, later led the move to pass the Intolerable Acts following the Boston Tea Party, which pushed the colonies on to revolution. While leaders petitioned him to intervene with Parliament over the unpopular acts, George refused and declared the leaders to be traitors and the war was on.

While the Loyalists believed that they would be successful through 1780, the Battles of Kings Mountain and Cowpens helped stem the tide. Cornwallis’ surrender at Yorktown the following year shocked everyone. Lord North saw his support ebb and he resigned in 1782. George the Third drafted an abdication notice after North resigned, but it was never delivered to Parliament. He accepted the defeat and directed negotiations with the colonies to begin, resulting in the Treaty of Paris which were signed in 1782. The treaty also ceded Florida back to the Spain in addition to concluding the war.

Later, George told John Adams, the new American Minister to Britain, that “I was the last to consent to the separation; but the separation having been made and having become inevitable, I have always said, as I say now, that I would be the first to meet the friendship of the United States as an independent power.”

Even with the loss of the American colonies, George continued to be popular with his constituents in Britain ruling some 38 years after the end of hostilities. He passed away on January 29, 1820. Two of his sons succeed him on the throne, but his legacy is that of his grandchild Victoria, who ruled Britain as Queen at the height of its power for 63 years from 1837 until 1901. He ruled Britain for fifty-nine years and ninety-six days, with only Queens Victoria and Elizabeth the Second (the current Queen of the United Kingdom) ruling longer.