Robert Sevier’s grave above the Toe River near Spruce Pine.

Heralded hero of the Battle of Kings Mountain and first governor of the new state of Tennessee (elected 5 additional times), John Sevier has several connections to Mitchell County.

John’s grandfather was Valentine “The Huguenot” Sevier, born 1678 in Paris, France, but who for political and safety concerns immigrated to and died in England in 1720. His son, Valentine “The Immigrant” Sevier, was born in 1701 in St. Giles Parish, London, to Valentine Sr. and his wife Mary Smith. In 1740, the young Valentine and his brother William “took ship” for the American Colonies. He settled in Culpeper County and in 1742 became a Captain in the Virginia Militia, serving during the French and Indian War. He married Joanna Goad in 1744, and John Sevier, their eldest child, was born 9/23/1745 in Rockingham County, VA. All 7 children of Valentine II were well educated for the time by tutors or in nearby small schools in the Shenandoah Valley settlements.

Although only about 16, John married Sarah Hawkins in 1761 in what is now Shenandoah County, VA, where they built a log home and operated a store—trading often with the Indians. He called the place New Market and so it remains today. John traveled extensively on business and warfare with the Indians. Having seen the country beyond, Sevier chose to move the family to the Holston River area, then to the Nolichucky, which made his first connection to the Toe River Valley.

Meanwhile, with waning tavern and farming business and the death of his wife Joanna, John’s father Valentine II moved for the third time. His family arrived on Christmas Day at Sycamore Shoals on the Watauga River, where the second Fort Watauga eventually was built on his land. Here he married a second wife, Jemima Young.

John Sevier lived in Washington County, NC, and in 1775 joined the North Carolina militia, becoming a lieutenant colonel the next year. Sarah passed away in early 1780 leaving him with 10 children.  On 8/16/1780, John married Katherine “Bonny Kate” Sherrill, a young woman that four years earlier he had helped to save during an Indian attack at Fort Watauga.

Not long after, Colonel Isaac Shelby interrupted their family celebration to inform John that Colonel Patrick Ferguson had sent POW Samuel Phillips, Shelby’s distant cousin, to give people over the mountain a mandate to surrender or he would “march over the mountains, hang their leaders, and lay waste the country with fire and sword.” This was not received with the fear that this intimidation was inteToe Rinded, which Ferguson was soon to regret.

With personal pledges to repay the money, Sevier and Shelby equipped their men, and they rode and/or walked over the mountains and down through the Toe River Valley to do battle with the British and their Tory allies at Kings Mountain. The troop included John’s brothers Robert, Valentine, Joseph, Abraham, and his 17-year old son Joseph. Unfortunately, during the battle, Captain Robert Sevier stooped to pick up his ramrod, and a bullet struck him near his kidney. After the battle, a Tory surgeon, Dr. Uzal Johnson, attempted to remove the bullet without success and insisted that Robert remain and recuperate before travelling home. He refused and 9 days later died on the return journey at Bright’s Place located just over the current Mitchell/Avery County line. He was wrapped in his blanket and buried in Bright’s Cemetery under a large oak tree. His grave and marker are within the restricted area of the Sibelco School House Mine; they open their gates annually for a commemoration ceremony for the public. This year it is scheduled for September 27th. 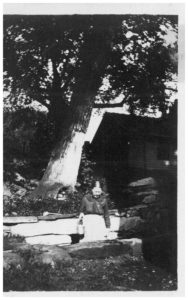 Nancy Matilda Wiseman Young at the Baker Spring in Bakersville.

According to family tradition and documented in John Preston Arthur’s Western North Carolina; A History (1730-1913), Sevier and his party, on their way back from Morganton, stopped at the Baker spring, located on the site of David Baker’s Store beside what was to become the Young Hotel in Bakersville and is now the Mountain Community Health Partnership annex.

John Sevier and his remaining brothers continued to contribute to their communities and nation, yet a part of him will always be connected to Mitchell County history and lore.

Please consider participating in the several Over Mountain Victory Celebration events coming up in September 14that the Museum of North Carolina Minerals Milepost 331 on the Blue Ridge Parkway. Re-enactors will demonstrate crafts and skills of the Revolutionary War period from 9 AM to 2 PM. A reenactment will be held at the Historic Orchard located 3 miles north on the Parkway at milepost 328 at 2:30 PM. From 7-9 PM, you can take an evening tour by candlelight through a Revolutionary War period encampment and catch a glimpse of history. For additional information, contact Ranger Faison at 828-348-3519.