Listen to the Podcast Online 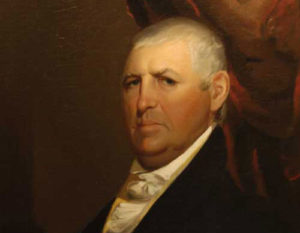 In September, 1780, a ragtag group of backwoodsmen from what is today North Carolina, South Carolina, Tennessee, and Virginia assembled to begin a journey to defend their homes and belief in liberty. They met their destiny at Kings Mountain and this is their story. The Mitchell County Historical Society presents Footsteps for Freedom: The Road to Kings Mountain. Episode Seven: Isaac Shelby.

We begin preparations for the Battle of Kings Mountain by presenting brief biographies of military leaders and significant local individuals over the next few episodes. Today, we begin with one of the main organizers of the Overmountain Men: Isaac Shelby.

Born in 1750 near Hagerstown, Maryland, Shelby’s parents were Evan and Letitia Shelby, who immigrated to Maryland from Wales in 1735. The family had a plantation and ran a fur trading business. Young Isaac also served as a surveyor and was named a deputy sheriff of Frederick County, Maryland. After his father’s business turned sour due to Native American raids and business records were destroyed in a house fire, Shelby, along with his family, moved near the location of present-day Bristol, Tennessee In December, 1770.

In 1774, Shelby served in Lord Dunmore’s War, which pitted colonists against Native Americans. Her served as second-in-command of his father’s military company, and he participated in the Battle of Point Pleasant, the decisive clash in the War. He picked up a commendation for skill and gallantry in the battle.

After the war, he helped survey the land purchased from the Cherokees that was to become Kentucky. He then became involved in the Revolutionary War, when Virginia Governor Patrick Henry appointed him to secure provisions for the frontier army. Later, he served in the Virginia House of Delegates in 1779 and was commissioned a Major by then-Virginia Governor Thomas Jefferson as a major and was commissioned to escort the group surveying the frontier boundary between Virginia and North Carolina.

In 1780, he was back in Kentucky surveying when he learned of the fall of Charleston. He traveled to North Carolina, where he assembled 300 militia and joined General Charles McDowell in South Carolina. There his forces secured the surrender of Thickety Fort by the British. Afterwards, his group participated in the Summer Campaign of 1780 just before Kings Mountain, including the Battle of Musgrove Mill, which we will discuss in another episode. Afterwards, he retreated with his forces across the Appalachians, fearing an attack from Major Patrick Ferguson’s Loyalist forces.

After Ferguson sent his famous threat to the Patriot forces in the mountains, Shelby met with John Sevier and the two raised approximately 500 men to go fight Ferguson. They, along with others, mustered at Sycamore Shoals and began the pursuit of Ferguson, ending at the Battle of Kings Mountain. We will save that story for another day.

After the battle, Shelby continued advising on attacks in the southern theater of the war, but returned home and negotiated a treaty with Dragging Canoe’s Chickamauga tribe. When he returned to the battle field in South Carolina, helped capture a British fort at Fair Lawn and was elected to the North Carolina General Assembly while in the field. He attended its 1781 session. He was re-elected to the General Assembly in 1782 and served another term.

He then returned to Kentucky in 1783, settling in Boonesborough. He married and had eleven children. He later served as the first Governor of Kentucky in 1791 and again as the fifth governor in 1812, undertaking several initiatives for the young state, including appointing future U.S. President William Henry Harrison to lead federal forces in Kentucky in the War of 1812. After leaving the office of Governor the second time, President James Monroe offered Shelby the post of Secretary of War, but he declined, citing his age. In 1820, he suffered a stroke and died on July 18, 1826.

Shelby has been honored for his service with nine states having a county named after him, including counties in Alabama, Illinois, Indiana, Iowa, Kentucky, Missouri, Ohio, Tennessee, and Texas. Eleven cities are named for Shelby, including Shelby, North Carolina, and three military installations bear his name, in Mississippi, Michigan, and Wisconsin.