Listen to the Episode from Anchor.fm

We offer a variety of ways you can subscribe to and download the episodes. Learn more on our Overmuontain Men page under the podcast section. 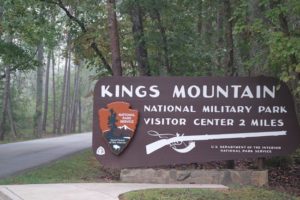 In September, 1780, a ragtag group of backwoodsmen from what is today North Carolina, South Carolina, Tennessee, and Virginia assembled to begin a journey to defend their homes and belief in liberty. They met their destiny at Kings Mountain and this is their story. The Mitchell County Historical Society presents Footsteps for Freedom: The Road to Kings Mountain. Episode Eight: Joseph Dobson.

Today, we are discussing Joseph Dobson who, while not a leader of men at the battle, had a significant role in the Kings Mountain campaign and exerted substantial influence in our area after the war.

Joseph was born June 4, 1756 in Lunenburg County, Virginia. He and his family moved to Burke County in 1764, near the Catawba River and most likely on land that is now under the waters of Lake James. The family moved to the area apparently at the behest of their oldest son John, who had land in the region and operated a tavern. Dobson’s father was the first university-trained doctor in Western North Carolina, having been educated in Scotland and Wales. He would later treat the wounded from the Battle of Kings Mountain. In 1776, the Dobson family suffered greatly at the hands of Cherokee raiders who swarmed into North Cove of what is today McDowell County. His niece was one of the children the Cherokees scalped and killed in the raid.

Young Joseph worked as a surveyor before his military career began. In 1778, Dobson married Mary Mackey. The couple built a house across the Catawba River from his father and had a large family. Later, he moved farther up into North Cove, establishing a prosperous plantation near the North Fork of the Catawba. He became very wealthy from his farming and land speculation he undertook with his father.

Dobson first volunteered for service as a private in the revolutionary war in March, 1776, serving in the Cross Creek area near Fayetteville, North Carolina. After the death of his niece, he volunteered to take part in Griffith Rutherford’s campaign that burned 11 Cherokee towns west of Asheville. He later fought along the Virginia border and as far south as the Savannah River area of South Carolina, where his unit was defeated by the British. In 1780, he fought at the Battle of Ramseur’s Mill in Lincoln County, where his brother John was killed. When the British Army under Major Patrick Ferguson entered Burke County in September 1780, Dobson was part of an unsuccessful effort to repulse him at the Battle of Cane Creek. Forced to retreat over the mountains to Sycamore Shoals, he joined up with forces organized by John Sevier, Isaac Shelby, and William Campbell, heading southeastward to the famous Battle of Kings Mountain. Dobson was given the dangerous assignment of courier and sent to take the message of the impending march and battle with Ferguson to Benjamin Cleveland’s forces in North Carolina.

At the Battle of Kings Mountain, Dobson was wounded in his right shoulder. Ironically, while his father cared for the wounded from the battle, Joseph was treated by Loyalist surgeon Doctor Uzal Johnson who was captured at Kings Mountain. He recovered from his wounds and returned home, mustering out of the army at the time.

Later, Dobson was promoted to captain and served out his time on another expedition against the Cherokee and as commander of the frontier forts in the Turkey Cove and North Cove regions of present-day McDowell County. He died in 1836 at age 80.

Dobson is notably for the Toe River Valley because he owned approximately one hundred thousand acres of property in present-day Yancey County, Mitchell County and the surrounding region. Dobson’s Knob, which is the mountain that can be seen at the intersection of U.S. Highway 221 and North Carolina Highway 226, is named for his family. Their original land grant was near the mountain, and may have included it.