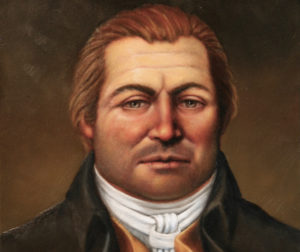 In September, 1780, a ragtag group of backwoodsmen from what is today North Carolina, South Carolina, Tennessee, and Virginia assembled to begin a journey to defend their homes and belief in liberty. They met their destiny at Kings Mountain and this is their story. The Mitchell County Historical Society presents Footsteps for Freedom: The Road to Kings Mountain. Episode Nine: Benjamin Cleveland.

Born May 28, 1738 near the famous Manassas/Bull Run Civil War battlefield in northern Virginia, Cleveland moved with his extended family to Wilkes County, North Carolina in 1769 at age 31. His neighbor was Daniel Boone and, in the summer of 1772, he and four others departed to explore the Kentucky backcountry after hearing Boone describe it. While on their journey, they were seized and robbed by a band of Cherokees. They took everything from the hunting party, but Cleveland apparently returned to Wilkes County, recovered from the raid, and returned to Kentucky, taking back his horses and returning home with them. He continued work as a hunter, trapper, farmer, carpenter and surveyor, and was very successful in his endeavors.

He was a large man and was good-natured according to others, but he had a reckless streak and was hot-tempered and very determined at times. He loved to gamble, race horses, carouse, drink, and fight common pastimes of the frontier. He married Mary Graves, a sister of Susannah Graves, the wife of Revolutionary War General Joseph Martin. She apparently curbed his rambunctious lifestyle, and it was said that the marriage resulted in his reluctant attempt at farming. At the time of the American Revolution, Cleveland was the wealthiest and most prominent citizen in the county.

Cleveland was lieutenant in the Surry County militia in 1775, a captain in the same regiment in 1776, then served the 2nd Battalion of Volunteers from 1776 to 1777. He was named colonel of the Wilkes County regiment in 1777, the group that he eventually leads to Kings Mountain, when the county was formed out of Surry County.

He was known as the Terror of the Tories due to his treatment of Loyalists. In one famous incident, Cleveland and his men captured two Tories who stole a clothesline and used it to chase away a friend’s horses. Cleveland then ordered the two hung, using the clothesline that was stolen, from a tree known as the Tory Oak which stands behind the old Wilkes County Courthouse. Cleveland was then kidnapped by Loyalist Captain William Riddle in retaliation, but was rescued by his brother Robert. He responded by hanging Riddle. Cleveland was brought up on murder charges after the hangings but was ultimately pardoned by the governor.

He was also known as a relentless fighter of Native Americans, taking on the Cherokee in the Yadkin River Valley and joining forces with other groups to destroy thirty-six Cherokee towns in South Carolina.

In 1780, when Joseph Dobson delivered the news that Patrick Ferguson had challenged the backwoodsmen with his declaration to burn their homes and hang their leaders, legend has that Cleveland climbed Rendezvous Mountain and blew his horn, summoning some 200 militia who joined him in the march to Kings Mountain. His horse was shot out from under him during the battle, and he claimed Ferguson’s white stallion following the battle and took hit home.

Oddly enough, when the Revolution closed, Cleveland was forced to surrender his land in Wilkes County. He moved to South Carolina frontier, settling along the Tugaloo River, where he lived out his remaining years in quiet repose, passing away in 1806. It was said that he became so large at the end of his life that he could not mount his horse, and weighed over 450 pounds at his death. His nephew, Jesse Franklin, later became Governor of North Carolina.