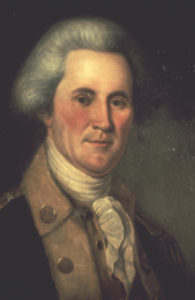 In September, 1780, a ragtag group of backwoodsmen from what is today North Carolina, South Carolina, Tennessee, and Virginia assembled to begin a journey to defend their homes and belief in liberty. They met their destiny at Kings Mountain and this is their story. The Mitchell County Historical Society presents Footsteps for Freedom: The Road to Kings Mountain. Episode Thirteen: John Sevier.

Probably more than any other, John Sevier is synonymous with the Battle of Kings Mountain. A flamboyant politician, solider, and statesman, Sevier was a driving force in organizing and leading the charge against Patrick Ferguson and the Tories.

Born in 1745 near New Market, Virginia to Valentine and Joanna Goad Sevier, John’s ancestors were originally French Huguenots who escaped religious persecution by moving to England. They anglicized their name from Xavier to Sevier. His father had moved to the prosperous Shenandoah Valley in Virginia in 1740, setting up as a farmer.

John Sevier married Sarah Hawkins when he as sixteen, settling in the Shenandoah. But by 1773, he was living on the Holston River in future Tennessee. In 1773, he was commissioned an officer in the Virginia Militia, but moved to a farm on the Watauga River near Elizabethton, then a part of North Carolina. He was one of five magistrates of the Watauga Association, an unofficial government of the settlements. They petitioned North Carolina for recognition of Watauga, which was ignored.

He was sent to the Provincial Congress of the Tar Heel State as a representative of the Watauga Settlements, which were reorganized as the Washington District of North Carolina. In 1776, he was made a lieutenant colonel in the North Carolina militia and assigned to protecting the frontier settlements.

Sevier became known for his abilities at fighting the Native Americans, driving them from the settlements and earning the ire of the British. Sevier’s wife Sarah died a few months before the Battle of Kings Mountain. He later married Catherine “Bonny Kate” Sherrill, whom he rescued during a surprise attack on Fort Watauga in 1776.

When Ferguson’s threat to lay waste to the region with fire and sword reached him, Sevier, along with others, organized the militia to march over the mountains to take on the Tories, eventually at Kings Mountain. We will discuss the battle more in detail later, but for now, we turn our attention to life for Sevier after the war.

Sevier advocated for Washington, Sullivan, and Greene Counties to break away from North Carolina and establish a new State called Franklin after founding father Benjamin Franklin. He became the first governor of the disputed state. However, North Carolina refused to acknowledge the secession of its overmountain counties as legitimate. After a period of civil unrest, Sevier and the pro-Franklin supporters were defeated by John Tipton in a small battle near Sycamore Shoals. Tipton sent Sevier across the mountain in chains on charges of treason.  On his way, he survived an assassination attempt on the top of Iron Mountain. Sevier never stood trial as his friends from the King’s Mountain Campaign, the McDowells, set him free shortly after he arrived in the Morganton jail. The effort to establish a state of Franklin a failure, Sevier took an oath of allegiance to North Carolina and was elected to the State Senate. He was even restored to his title of Brigadier General in the North Carolina militia.

In 1789, North Carolina ceded its western lands to the United States and the Southwest Territory was established. Sevier was eventually elected to Congress for Greene County in 1790.  After his term, he became a member of the Territorial Legislative Council under territorial governor William Blount. When the State of Tennessee was created by Congress in 1796, Sevier was elected its first Governor, serving three terms, then taking a forced two-year break under the new constitution until he was re-elected for three more terms in 1803. In 1811, he was again elected to Congress for three more terms, but was largely ineffective due to his advanced age and unfamiliarity with federal procedures of that time.

Sevier died September 24, 1815 while on a mission as a congressman to the Alabama territory to help establish a boundary with the Creek nation. He was buried near Fort Decatur, where he laid until 1887, when he was reinterred on the courthouse lawn in Knoxville.

He is honored throughout Tennessee with many buildings and schools named after him and Bonnie Kate, his wife. In addition, Sevier County and the city of Sevierville are named for him. In North Carolina, the McDowell County community of Sevier is named for him.

Sevier’s legacy is mixed. While a popular and effective military leader, his political dealings often encountered strong opposition. He had problems building coalitions and governing through them. He is fondly remembered for his war cry of “Here they are! Come on boys!”