Transcript for the Episode 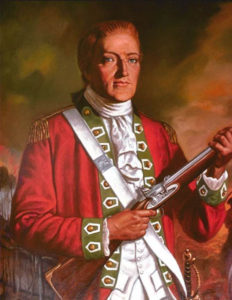 In September, 1780, a ragtag group of backwoodsmen from what is today North Carolina, South Carolina, Tennessee, and Virginia assembled to begin a journey to defend their homes and belief in liberty. They met their destiny at Kings Mountain and this is their story. The Mitchell County Historical Society presents Footsteps for Freedom: The Road to Kings Mountain. Episode Fourteen: Major Patrick Ferguson.

Today’s episode is about the one who would be considered the villain in our story, but it is more complicated than that. Major Patrick Ferguson was a noted officer in the British army, and even invented a rifle that was named after him, but we’ll get to all that as we tell his story.

Patrick Ferguson was born June 4, 1744 in Aberdeenshire, Scotland. Both of his parents came from the nobility. Young Patrick began military service as a teenager, serving with the Scots Grays in the Seven Years War. After an injury sidelined him for a time, Ferguson joined the 70th Regiment of Foot in the British Army, and was sent to the West Indies where he served until the leg injury he had suffered earlier rendered his service there complete.

He returned to England in 1772, gaining the attention of General William Howe who later served as the Commander-in-Chief of British forces during the Revolutionary War. He also invented the Ferguson Rifle, a breech-loading flintlock weapon that was considered the most superior sharpshooting rifle of the time.  A soldier armed with the Ferguson rifle could fire up to eight shots per minute compared to the three rounds a soldier armed with the standard British Brown Bess musket could get off and the one shot per minute the Overmountain frontiersmen could average with their Kentucky Long Rifles.

Ferguson was shipped to the American Colonies in 1777. He commanded a small unit armed with his experimental rifles at the Battle of Brandywine.  During this battle, Ferguson passed on the opportunity to kill General George Washington who had unknowingly rode very close to Ferguson’s concealed troops well within the lethal range of his new rifle.  Ferguson felt is was ungentlemanly to kill such a brave officer in such a manner and ordered his men not to fire.  Later during the same battle, a musket ball shattered his elbow which put him out of commission for a year. He returned to Britain to recuperate and attend to his father’s estate who had recently passed away. In 1778, he returned to the colonies under the command of Henry Clinton, leading a raid at Little Egg Harbor River in New Jersey in the Battle of Chestnut Neck, where his troops bayoneted the Patriot forces.

On October 25, 1779, Ferguson was promoted to major of the 71st Regiment of Foot and sent south with Lord Cornwallis to capture Charleston and to recruit Loyalist militia to the King’s colors. After the fall of Charleston, he moved into the western portions of North and South Carolina where he engaged in several skirmishes in the summer of 1780. The battles enraged Ferguson as they occurred against ragtag groups of men from the piedmont and mountains of North and South Carolina, along with the Watauga Settlements in today’s East Tennessee. These skirmishes featured quick attacks by the Patriots followed by retreats into the hills. This led to Ferguson traveling to Gilbert Town (today’s Rutherfordton) and making his famous declaration that he was going to chase the retreating Patriot forces across the mountains to their homes, hang their leaders and lay waste to their settlements “with fire and sword.”

Upon learning a large force of mountaineers was gathering against him, Ferguson retreated towards Cornwallis’ forces in Charlotte. Fearing that the Patriots were hot on his trail, he headed southeasterly and found a nondescript hill that rose some 800 feet above the surrounding area. He determined that would be a formidable defensible location for his troops. They could see around them in a three hundred sixty degree sweep and could repulse any attacks coming their way. The force ascended the slopes of the mountain and began digging in for battle, which would be coming in a few days.  Ferguson felt assured that “God himself could not remove him from that mountain!”

We’ll stop there with Ferguson and tell his fate when we talk about the Battle of Kings Mountain.