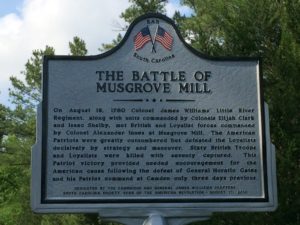 In September, 1780, a ragtag group of backwoodsmen from what is today North Carolina, South Carolina, Tennessee, and Virginia assembled to begin a journey to defend their homes and belief in liberty. They met their destiny at Kings Mountain and this is their story. The Mitchell County Historical Society presents Footsteps for Freedom: The Road to Kings Mountain. Episode Sixteen: The Summer of 1780 Campaign – Part Two.

In the Summer of 1780, war raged in the backcountry of South Carolina. It was truly America’s first Civil War, as most men on both sides had never been to Great Britain which meant it was American fighting American, and the style of battle between them was particularly brutal and gruesome, a trait their descendants would emulate some 80 years later. Last time, we discussed the Battles of Thicketty Fort and Wofford’s Ironworks. Today’s battle was a tipping point of sorts, leading Patrick Ferguson to make a declaration that angered the backcountry woodsmen and led them to form up in militia to deal with him. But first, we have today’s contest between the Loyalists and the Patriots.

One of the pivotal battles of the summer of 1780 took place at Musgroves Mill, located south of present-day Spartanburg, South Carolina. On the evening of August 18, 1780, two hundred Patriots, under the command of Colonels Isaac Shelby, James Williams, and Elijah Clarke raided a Loyalist camp at the mill. Overmountain Men units from Burke County, North Carolina, and the Watauga Settlements in Washington and Sullivan Counties of future Tennessee, joined with militia from South Carolina and Georgia in conducting the raid.

Musgroves Mill was a strategic location that controlled the local grain supply, plus it provided cover for the Loyalists to guard a ford of the Enoree River that was vital to troop movement in the backcountry of South Carolina.

To the Patriots’ surprise, they discovered that the Loyalist camp of two hundred they were told was guarding the mill had been reinforced by a hundred more militia and also by two hundred additional provincial regulars who were on their way to meet up with Patrick Ferguson’s force. In other words, they were outnumbered two to one. Plus, their horses were unable to go into battle without rest. They bad to stand and fight where they were after being discovered by a Loyalist patrol.

Using guerrilla tactics, twenty men crossed the Enoree River and, faking confusion in their lines, drew the Loyalists back to the Patriot line. The Tories spotted their Patriot adversaries and commenced the battle by shooting first, but they were out of range of the Patriots. The backwoodsmen held their fire until the Loyalists moved into the killing range of their muskets.

They then opened with a deadly volley on the pro-British troops, but the Loyalists kept coming and presented a bayonet charge, almost overwhelming the Patriot right flank. The backwoodsmen had no bayonets avaiable to use. Then, Isaac Shelby brought his troops into the battle, having them yell with Indian war cries. This slowed the Loyalist advance, with several of their officers being wounded, and it caused their lines to break.

The whole battle was over within an hour. Sixty-three of the Loyalist forces were killed, an unknown number were wounded, and seventy were taken prisoner, being marched to Salem, North Carolina after the conflict ended. The Patriots lost four killed and twelve soldiers were wounded. After learning of a Patriot defeat at Camden, South Carolina, the Overmountain Men then fled across the hills back to the Watauga Settlements with Patrick Ferguson’s army in hot pursuit. Ferguson failed in his quest to catch up with these forces and it enraged him.

The Overmountain Men reached Sycamore Shoals near present-day Elizabethon, where they regrouped and awaited Ferguson’s next move. It would come shortly.

Links for the Episode