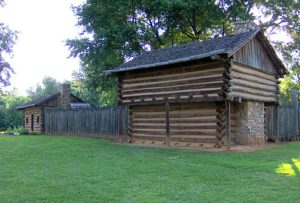 In September, 1780, a ragtag group of backwoodsmen from what is today North Carolina, South Carolina, Tennessee, and Virginia assembled to begin a journey to defend their homes and belief in liberty. They met their destiny at Kings Mountain and this is their story. The Mitchell County Historical Society presents Footsteps for Freedom: The Road to Kings Mountain. Episode Eighteen: Sycamore Shoals and the March Begins.

As word of Ferguson’s threat got back across the mountain and preparations were completed to confront him, John Sevier and Isaac Shelby sent out the call throughout the region for men to gather at the Sycamore Shoals on the Watauga River and depart in search of the Loyalist forces.

The question arises why there? Sycamore Shoals, also known as the Watauga Old Fields, had long been considered as a strategic location militarily. The land was relatively flat and cleared of trees and made for a perfect settlement location, plus the shoals made for an easy location to wade across the river. Native Americans from prehistoric times up through the Cherokees considered it an important area and had either lived or gathered there for centuries.

In 1775, Daniel Boone and Richard Henderson negotiated the Treaty of Sycamore Shoals in which Henderson’s Transylvania Company purchased a large part of what is today Kentucky and Tennessee from the Cherokee including the area around the Shoals. The Watauga Settlement, which had some families around 1770, constructed a fort at the Shoals in 1775, which they named for North Carolina Governor Richard Caswell. However, the fort is more popularly known as Fort Watauga. 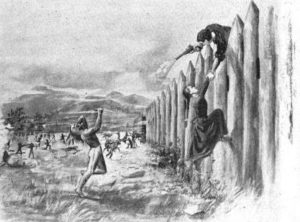 In January, 1776, the British entered into a treaty with the Cherokee Nation and supplied them with weapons. War Chief Dragging Canoe saw an opportunity to repudiate the Watauga land deal that had been made over his objections, telling the settlers in April, 1776 that they should leave the lands that they had just purchased. In mid-July, 1776, the Cherokee attacked Fort Watauga. This attack was repelled after a two-week siege and included the famous incident where John Sevier saved his future bride Bonny Kate Sherill by swinging her to safety over the fort walls.

Fort Watauga’s stature as a major military location established, it became part of a thriving settlement and a refuge for Patriots seeking safety from the Loyalists. So when the call went out for volunteers to track down and engage Patrick Ferguson’s forces, the Fort was a logical location for the men to gather.

On September 25th, a force of 400 Virginians led by William Campbell, 240 from Sullivan County men led by Isaac Shelby, 240 Washington County men led by John Sevier, along with 160 Burke County men under Charles McDowell, met at Fort Watauga to organize the march. This army of more than 1,040 men received food donated by the locals and gunpowder manufactured by Mary Patton. The Reverend Samuel Doak stepped forward and ginned up their fighting spirit with a fiery sermon that urged them to take up “the sword of the Lord and Gideon” and smite those who plotted our destruction and exalted themselves against liberty, justice and truth. 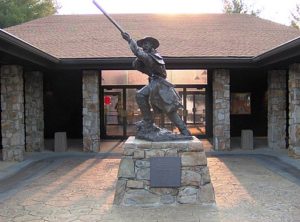 The question of who was to command the army was raised.  By right of seniority, the command should have gone to Colonel Charles McDowell, but he had made some critical command failures in the previous campaign.  Most notable among these was failing to properly secure his camp at Earle’s Ford. A British night time raid exposed this failure when they successfully got into camp undetected and bayoneted several Patriot troops to death in their beds.  The Patriot officers refused to serve under McDowell again and concocted a face-saving excuse that McDowell was too old to assume command even though he was only two years older than John Sevier. William Campbell was selected to be the overall commander of the army because he brought the largest force of men and as a Virginian, he was the only colonel that was not in the North Carolina militia. Despite granting Campbell command, each of the colonels agreed to act in council when making military decisions.  Colonel McDowell volunteered to ride to the headquarters of the Continental Army in Hillsborough and ask that General Daniel Morgan be assigned to lead to lead the expedition. The battle of King’s Mountain would be over before he could complete this mission.  Joseph Dobson, whom we discussed earlier, was sent on ahead of the army to alert forces in North Carolina, particularly Benjamin Cleveland in Wilkes County, about the group and their mission to attack Ferguson’s forces.

Finally, the army moved out, heading southeast toward Yellow Mountain and Roan Mountain and a trail leading across them, beginning their march to Kings Mountain. Tomorrow, we begin following the army as it heads to a confrontation with Ferguson’s forces some 13 days in the future and 170 miles away.