In September, 1780, a ragtag group of backwoodsmen from what is today North Carolina, South Carolina, Tennessee, and Virginia assembled to begin a journey to defend their homes and belief in liberty. They met their destiny at Kings Mountain and this is their story. The Mitchell County Historical Society presents Footsteps for Freedom: The Road to Kings Mountain. Episode Nineteen: To the Doe River and the Shelving Rock.

The first day of the march to Kings Mountain was fairly uneventful and surprisingly slow going considering the Overmountain Men only marched a little over three miles after leaving Sycamore Shoals.

Their slow progress was due to a herd of cattle that they drove along with them.  This food on the hoof as it was known severely impeded their progress.  After the first day, they stopped and slaughtered some of beeves, but decided to leave the rest of the cattle behind so they could pick up the pace. 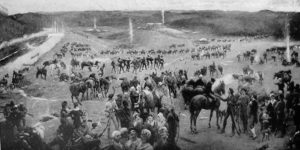 The Overmountain Men at SYcamore Shoals

The Overmountain Men were mounted infantry. That meant that they rode on horseback to where they were going to fight, then they would dismount and fight the battle on foot. With the distance they would have to cover to reach Ferguson, they would need to average traveling around 12 or 13 miles per day. Also while they had a general idea of where Ferguson’s forces were located as they began their march (Gilbert Town near present-day Rutherfordton), every day that passed on the journey gave Ferguson the opportunity to move.  So, the longer it took them to cross the mountains, the less certain they were of where they could find the Loyalists to engage them in battle. Rain began falling on the army as they continued their travels. The path they took led them by Gap Creek near Gunpowder Mary Patton’s house and they continued down the valley, fording the Doe River twice near Roan Mountain, Tennessee. They reached a location where there was room for the large group of horsemen to camp with their animals. More importantly, they had found a place to keep their precious stocks of gunpowder dry. They stored it under a large rock overhang. You can drive right by the Shelving Rock, as it is known today, since Tennessee Highway 143 runs right by it on the way to and from Roan Mountain. Back then, the overhang was larger and provided ample room to protect their entire supply from the bad weather. After securing the powder, the Overmountain Men made camp, enjoyed a meal and some much-needed rest.

Meanwhile, over the mountains in the piedmont of North Carolina, Lord Charles Cornwallis had turned north after succeeding in taking Charleston, South Carolina and winning a significant victory at Camden, South Carolina. He decided to move into North Carolina and occupy the hamlet of Charlotte. He arrived there on September 26th, the same day the Overmountain Men camped along the Doe River. Encountering unexpectedly sharp resistance from local Patriot forces under the command of William Richardson Davie, Cornwallis sent Major George Hanger to cautiously enter the town and look for militia. But Hanger did not follow orders and got into a skirmish with Davie’s troops. Hanger was shot and injured during the melee. Cornwallis himself then rode to the front, declaring that the Patriots “had everything to lose and nothing to gain” by attacking his forces. He started his lines forward and, with additional British infantry arriving, Davie reluctantly withdrew his feisty militiamen allowing Cornwallis to occupy the town.

Word of Cornwallis’ Redcoats capturing this Hornet’s Nest known Charlotte got back to Major Patrick Ferguson. He noted its position in case he needed to link up with the main British army sometime in the future.  For now, Ferguson’s forces were still camped at Gilbert Town and he was oblivious to the fact that the whole Carolina backcountry was in the process of rising against him, much less that there was a large Patriot army already on the march across the mountains in search of him.

The pursuit continues tomorrow, with the Overmountain Men beginning the challenging crossing on the Yellow Mountain Trail across the Roan Highlands and into the Tri-County area.