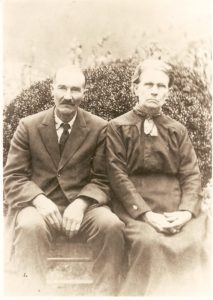 Major Jonathan Tipton was one of the Overmountain Men who marched from Tennessee to Kings Mountain and fought in the 10/7/1780 battle that was “the turning point of the America Revolution” (Thomas Jefferson).  Besides traveling along the Overmountain Victory Trail through what is now Mitchell County, Jonathan Tipton is linked to our area through his children who settled in the Toe River Valley.

Jonathan Tipton was born 10/23/1750 in Frederick County, VA.  The third to bear the name, Jonathan was the son of Jonathan Tipton II; researchers dispute whether his mother was his father’s third wife Julia (maiden name unknown) or his fourth wife, Elizabeth Mary Adams.  Before he left Frederick County abut 1775, Jonathan III married Francis Perlina Daugherty (ca 1754 – ca 1809).  The couple moved with his father’s family to the Watauga Valley in what was then Rowan County, NC, but would become Washington County, NC, Washington County, TN, and then Carter County, TN, in 1796.

In 1776, Jonathan Tipton was a signer of the Watauga Petition for annexation by the State of North Carolina.  He was commissioned as major in 1777 and “was second-in-command of Sevier’s regiment at Kings Mountain” (Lyman C. Draper).  Major Tipton also participated with John Sevier in several campaigns against Native Americans.  He was part of General Nathaniel Greene’s forces in South Carolina until his discharge in September 1781.

Jonathan’s second wife was Keziah Robertson, who was born 1753 in Virginia and died 1806 in Buncombe County, NC.  She was the widow of Robert Sevier, the Overmountain Man who was mortally wounded at Kings Mountain, died on the trek back to TN, and is buried in the Davenport Cemetery at what was then Bright’s Place.

About 1798, Major Jonathan and part of his family moved across the mountain into NC, and Buncombe County, the part that would become Yancey County.  In 1825, Jonathan and his third wife, Lavinia Stephens, 30-40 years his junior, moved to Overton County, TN; he filed for a Revolutionary pension in 1832 and died there on 1/18/1833.

With his three wives, Jonathan was reputedly the father of 15 or 16 children.   Some of the Tipton family moved into what would become Mitchell County, and the community of Tipton Hill was named for them.   At least 5 of Major Jonathan’s sons settled in the Toe River Valley; they include Jonathan, Jr., Wiley, Jacob, David, and Joseph.  There is considerable disagreement among genealogists about which of his grandsons were issue of which of Jonathan’s sons.

Jonathan Tipton IV was born in the Watauga Settlement, then Rowan County, NC; the census and researchers vary on the year of his birth (1776 or 1783) and whether he was the son of Major Jonathan with Francis or with Keziah.  The younger Jonathan married at least once, to Judy Taylor, but he may have had other wives, Sally and Patsy, maiden names unknown.  Jonathan IV, father of about 17 children, died around 1850 in Yancey County.

Wiley Tipton was born about 1785 in the Watauga Settlement in what is now Tennessee.  He married Anna McKinney, and they had perhaps 11 children.  Wiley died between 1840 and 1850

Jacob Tipton was the son of Major Jonathan Tipton and Keziah Robertson Sevier.  He was born 1791 in Watauga District, TN, and died, according to family records, 1865 in Mitchell County, NC.  He married Elizabeth Edwards, born about 1800 in TN and died sometime after 1850. Their children, some researchers claim, numbered 17.

David Tipton was also the son of Major Jonathan and Keziah. He was born about 1794 in TN and died before 1840 on Jacks Creek in Yancey County.  His wife was Eleanor Patterson, who was born before 1800 TN and died 1860-70 in Mitchell County.  The couple had at least 9 children known to this researcher.

Joseph Tipton, likewise son of Major Jonathan and Keziah, was born about 1796 in TN and died in Yancey County in 1884.  With his first wife Sarah Ann Bennett (1800-1847) and his second wife Drucilla, research reveals, he fathered 18 children.

For more information about our area’s role in the Revolutionary War, you may also want to listen to the Mitchell County Historical Society’s daily podcast entitled “Footsteps for Freedom: the Road to Kings Mountain” on WTOE radio in Spruce Pine (1470 on the AM dial). This program is a production of MCHS, a non-profit organization committed to the preservation of the history, heritage, and culture of Mitchell County, NC. You can also download episodes through Apple Podcasts and Google Podcasts.