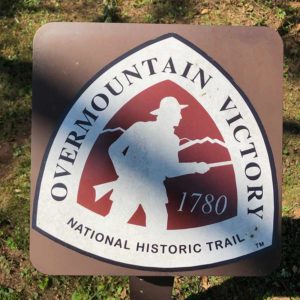 In September, 1780, a ragtag group of backwoodsmen from what is today North Carolina, South Carolina, Tennessee, and Virginia assembled to begin a journey to defend their homes and belief in liberty. They met their destiny at Kings Mountain and this is their story. The Mitchell County Historical Society presents Footsteps for Freedom: The Road to Kings Mountain. Episode 23 – South Mountain Pass and Trouble in the Ranks.

October 1, 1780, a Sunday, the combined army of Patriot militia broke camp at Quaker Meadows. We have followed and discussed the militias of McDowell, Shelby, Sevier and Campbell extensively as they made their way across the Blue Ridge Mountains to this rendezvous at modern-day Morganton. But what of the troops of Colonel Benjamin Cleveland and Major Joseph Winston from Wilkes and Surry Counties that they met there?

Joseph Dobson and other express riders had carried the news of Ferguson’s threat and the plan to deal with him to the Yadkin River Valley settlements about two weeks prior.  The news reached Cleveland while he in the process of suppressing Loyalist activity near the headwaters of the New River. He immediately made plans to respond to the call for assistance.  Major Joseph Winston likewise responded to the call and issued orders for his Surry County militia to muster near modern-day Elkin, NC on September 27th.  Once this was done, the march to the rendezvous with the Overmountain Men at Quaker Meadows commenced.  Somewhere on the Yadkin River near Wilkesboro, Cleveland and Winston’s forces linked up.  Their combined force of 350 men marched southwest past Fort Defiance and passed through Happy Valley. Nearly a century later this site would witness the gruesome murder of Laura Foster at the hands of Tom Dooley giving rise to a folksong that is still sung in these hills today. On the evening of September 29th, they camped at Fort Crider in the modern-day city of Lenior.

After leaving Fort Crider, they crossed the Brushy Mountains and reached Lovelady’s Ford on the Catawba River.  It was here that this force ran into its first bit of trouble. A small number of Loyalists concealed in the rocky cliffs on the otherside of the river opened fire as the Patriot militia was crossing the stream.  Hoping to derail the entire expedition by decapitating its leadership, the Loyalists took a careful bead on Cleveland who was leading the troops across the river.  The musketball struck home and severely wounded Cleveland in the thigh knocking him out of further participation in the campaign.  Fortunately for the cause of Independence, the Cleveland that the Loyalist wounded that day was not Colonel Benjamin Cleveland but his younger brother Lieutenant Larkin Cleveland who bore a striking resemblance to his older brother. The wounded younger brother was sent home in a canoe up the river while Benjamin Cleveland led his men the remaining short distance to Quaker Meadows arriving to the joyous huzzahs of their Overmountain allies.

Using intelligence they received that located Ferguson in Gilbert Town, near today’s Rutherfordton, they set out on a well-traveled road southeast seeking battle. Today’s US Highway 64 between Morganton and Rutherfordton approximates this route. The rolling hills of Burke County, combined with the quality road, enabled them to pick up speed and cover quite a bit of ground. However, late in the afternoon the rain, their arch nemesis they had battled since leaving Sycamore Shoals, returned with a vengeance. A heavy downpour forced a stop at Bedford Hill at South Mountain Gap, near present-day Dysartsville, North Carolina. This is near where Charles McDowell’s force encountered Patrick Ferguson’s Tories a few weeks earlier in the sharp little fight on Cane Creek. There, they made camp for the fourth night of the march.

The combined armies awaken to a steady rain again on the morning of October 2nd, enough to keep them in camp. This did not sit well with the men as fights began to break out between them, necessitating a meeting by the leaders to discuss the lack of military discipline and need for leadership. Charles McDowell, the senior officer, called the meeting. It was suggested that a courier be sent to Hillsborough to request a Continental line officer to lead them into battle. Isaac Shelby disagreed, stating that precious time would be wasted waiting for a commander. He suggested that William Campbell, who had been put in overall command at the meeting on Yellow Mountain Gap, be named overall commander of the force. Campbell attempted to avoid the assignment and get Shelby to take the reins but he refused. While he held seniority, Charles McDowell was not seen as a decisive commander, and it was suggested that he travel to General Horatio Gates and inform him of the military operation. He accepted his fate, turning over his men to Major Joseph McDowell and left for the meeting with Gates. Campbell then assumed overall command of the army.

Patrick Ferguson was busy as the Overmountain Men were leaving Quaker Meadows October 1st. As we noted yesterday, he heard from the deserters Chambers and Crawford and had sent requests to Cornwallis for reinforcements but had not heard from them. His troops were located at Denard’s Ford of the Broad River in then-Tryon County, North Carolina. His attempt to bag Elijah Clarke’s Georgians as they retreated toward the Blue Ridge officially failed on October 3rd as Clarke slipped his force through Saluda Gap successfully eluding Ferguson’s pursuit. At this point, Ferguson apparently felt that the report that Chambers and Crawford was serious enough that it merited his attention. He circulated a rumor that he was marching his forces to Ninety-Six, South Carolina, which he had no intention to do. He also published what was known as a broadside, a poster that circulated in Western North Carolina. It reads as follows:

“Unless you wish to be eat up by an inundation of barbarians, who have begun by murdering an unarmed son before the aged father, and afterwards lopped off his arms, and who by their shocking cruelties and irregularities, give the best proof of their cowardice and want of discipline; I say, if you wish to be pinioned, robbed, and murdered, and see your wives and daughters, in four days, abused by the dregs of mankind—in short, if you wish or deserve to live, and bear the name of men, grasp your arms in a moment and run to camp.

The Back Water men have crossed the mountains; McDowell, Hampton, Shelby and Cleveland are at their head, so that you know what you have to depend upon. If you choose to be degraded forever and ever by a set of mongrels, say so at once, and let your women turn their backs upon you, and look out for real men to protect them.

On October 2nd, Ferguson marched his men 4 miles and had them to “lay on their arms” as they slept, for he feared attack by the approaching army, but no attack came. While there, he considered his next move in the cat and mouse game he was playing with the Patriots. We will continue here on the next episode.