In September, 1780, a ragtag group of backwoodsmen from what is today North Carolina, South Carolina, Tennessee, and Virginia assembled to begin a journey to defend their homes and belief in liberty. They met their destiny at Kings Mountain and this is their story. The Mitchell County Historical Society presents Footsteps for Freedom: The Road to Kings Mountain. Episode 24 – Gilbert Town and the Broad River. 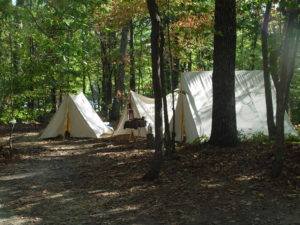 During the time in camp, both Patriot and Tory forces had scouts looking for the enemy, but neither side had luck in locating the other. The rain had finally let up on October 3, 1780, and the combined army prepared to move from Bedford Hill southward toward Gilbert Town, some 15 miles away.

Ferguson had made his camp at Gilbert Town which was one of the larger settlements in the western portion of then-Tryon County, North Carolina. It was formed by William Gilbert when he settled there in 1760 following time in Massachusetts and Pennsylvania, and he was one of the largest landholders in Tryon County. Ferguson had camped his forces there for several weeks following the Battle of Musgrove’s Mill. Scouts had incorrectly informed the Overmountain Men when they were at Quaker Meadows that Ferguson was still there (he was actually about 18 miles southwest of Gilbert Town that day), so they set out to engage him there. 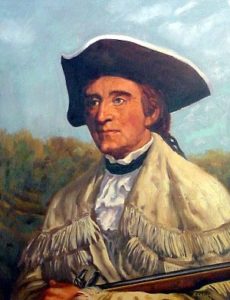 They began their march down the road that had been so good to them before the recent rains. They covered the fifteen miles in good time. Campbell stopped the force just before they got to Gilbert Town and once again talked to the men about Ferguson and his forces, why they were fighting, and what was about to happen when they encountered them. He gave one more chance for anyone who was not committed to seeing the battle through to drop out, but no one is noted for leaving. With that, Campbell spurred the mounted forces forward, heading into the outskirts of Gilbert Town. 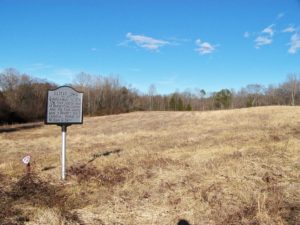 What they found next shocked them. There was an empty camp location where Ferguson’s men had been earlier, but it was deserted. Was this a trap? Campbell sent out scouting parties all around, looking for Ferguson’s forces. They returned one by one, reporting no sign of the Tories. What they did learn was that he had left Gilbert Town a couple of days before, heading south towards the Broad River. By the time the scouting parties returned, the afternoon was growing long and there would not be opportunity to take up pursuit, so the group settled into their own campsite at Gilbert Town. Campbell, Shelby, Sevier, Cleveland, Winston, and the other officers used the evening to prepare for battle, fixing rations for the soldiers to eat in the field, cleaning and checking muskets and rifles, and getting everything ready for battle. The leaders felt it could happen at any time, so they sent out scouts again looking for Ferguson and stationed pickets all around the camp to protect it. 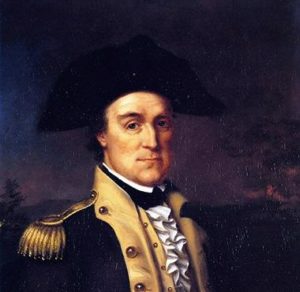 Ferguson was busy too. He had left Gilbert Town on September 27th, heading to the Green River in an attempt to capture Colonel Elijah Clarke’s Georgia militia. Clarke’s retreat to the mountains from his failed siege of Augusta, Georgia was burdened by the presence of his men’s wives and children.  The war in the Southern backcountry was becoming more brutal by the day and his men felt they had no choice up to uproot their entire households and get them to the Overmountain country beyond the reach of Loyalist reprisals. 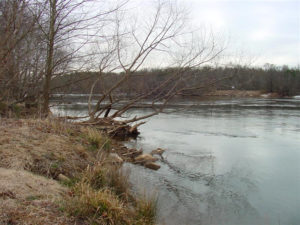 The Broad River in South Carolina

Despite the extra encumbrances slowing the Georgians exodus, Ferguson failed to intercept them. By this point, Ferguson had received news about the Overmountain Men’s approach from the deserters Chambers and Crawford and heard rumors that the entire Carolina backcountry was rising against him.  Despite this he placed the two deserters under arrest apparently under the belief that they were feeding him false information.  If the rumors were true, the army that faced him likely already outnumber him and was gaining additional strength with each mile they traveled.  His force on the other hand was terribly exposed in its current location and was beyond the reach of effective support from the other British units. Ferguson judiciously decided to retreat toward Cornwallis in Charlotte cutting the distance reinforcements would have to travel to assist him. However, having heard nothing from Cornwallis about reinforcements and receiving word from Lieutenant Colonel J.H. Cruger at Ninety-Six, South Carolina that he had no men to spare, Ferguson began recalling the Loyalists that he had furloughed recently, thinking he would not need them in battle. He crossed the Broad River and travelled slowly eastward, hoping to give those he furloughed a chance to rejoin his army. But now, the chase was on and Ferguson began planning a route to safety. It would take him to a future battle site and then see him make a fateful decision about where he wanted to stop and give battle. We will pick up the story there tomorrow.