In September, 1780, a ragtag group of backwoodsmen from what is today North Carolina, South Carolina, Tennessee, and Virginia assembled to begin a journey to defend their homes and belief in liberty. They met their destiny at Kings Mountain and this is their story. The Mitchell County Historical Society presents Footsteps for Freedom: The Road to Kings Mountain. Episode 25 – The Cowpens and Prelude to the Battle of Kings Mountain.

The morning of October 5, 1780 finds the Over Mountain Men breaking camp at Gilbert Town and preparing for their date with destiny. Officers and volunteers both are beginning to feel the moment. This is IT. Ferguson and his troops could appear at any time and battle would be given. As they prepared to move out, it is sure that prayers were offered for safety and protection by the men as they checked and rechecked their weapons and supplies for the battle.

The officers gathered and, with the latest reports from scouts and other sources, they determined to head south along Cane Creek away from Gilbert Town, as they were told Ferguson was in South Carolina, possibly heading to Ninety-Six, and they were determined to catch him before he could get there. The army was soon joined by a few troops that Colonel Elijah Clarke’s Georgia militia could spare, along with forces from present-day Lincoln County, North Carolina under Lieutenant Colonel William Chronicle. They began cautiously making their way down the creek, using scouts and patrols to probe the areas around them looking for Ferguson’s men. 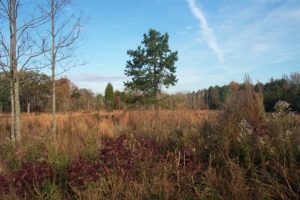 The Cow Pens in South Carolina

At the same time, Ferguson sent out units as feelers, looking to find the vaunted “backwater men” as he called them so he could deal with them his own terms. He began to get reports back that they were nearing his army. Ferguson then led his men across the Broad River to a road that would take them to Ninety-Six, South Carolina if they turned right. But, continuing his deception, he turned his troops to the left and headed eastward on the road towards Charlotte, passing through a holding area for cattle: the Cow Pens. That location would host its own pivotal battle in the war three months later. For now, Ferguson continued on eastward, looking for a defensible location to camp and to set up a battle location to deal with the backwoods men. He spied a lone “mountain” rising above the surrounding land. It was a spot that would provide excellent views of the surrounding countryside.  This was important because Revolutionary armies whether on horse or on foot would kick up huge clouds of dust that from a proper vantage point on high enough ground could be seen from miles away.  From the peak, he was sure that that he would spot the approaching Backcountry horde long before they reached eliminating any possibility of surprise. Ferguson sent scouts to explore the mountain and, when they returned with a good report of the location, Ferguson ordered his men to the top of the mountain to make camp. He then dispatched a second note to Cornwallis requesting reinforcements be sent to him.  If things went perfectly, Ferguson’s own force would serve as bait for a trap that Cornwallis could spring if he arrived to the battle in time.  A crushing defeat of the Patriot backcountry militia here could potentially end all Patriot resistance south of Virginia. Besides its fine defensive attributes, Ferguson was enamored with the name of the peak “Kings Mountain,” saying that it was ordained to be a place to defend the honor of King George. In actuality, the mountain is named for a settler named King who had a homestead at the foot of the peak. As they completed settled in for the night, Ferguson supposedly stated that “God Almighty Himself could not remove him from that mountain.”

The Overmountain Men continued in pursuit, themselves crossing the Broad River and arriving at Cowpens, where they made camp. The soldiers were cold and hungry. Some had been away from their homes for nearly two weeks. The additional troops that they gained on the march were appreciated but many of these reinforcements were on foot, slowing their pursuit of Ferguson and increasing the chances that Ferguson would win the race to Charlotte and the safety of Cornwallis’ main army, a force too strong for even this large gathering of militia to attempt to assault. Yet, the camp bristled with excitement as Colonel Edward Lacey arrived with news that Ferguson was just a few miles away at Kings Mountain. Lacey promised to bring additional men to go into battle since they knew where he was. Later, another scout, Joseph Kerr, came to the combined army and reported, like Lacey, that Ferguson was at Little Kings Mountain awaiting reinforcements from Cornwallis. So their nemesis was almost within reach. Next time, we will see what happens when the Patriots catch up to the Tories at the Battle of Kings Mountain.