In September, 1780, a ragtag group of backwoodsmen from what is today North Carolina, South Carolina, Tennessee, and Virginia assembled to begin a journey to defend their homes and belief in liberty. They met their destiny at Kings Mountain and this is their story. The Mitchell County Historical Society presents Footsteps for Freedom: The Road to Kings Mountain. Episode 28: The Aftermath. 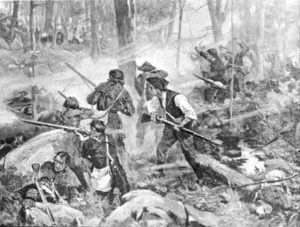 The thick clouds of black powder smoke that obscured King’s Mountain battlefield began to lift revealing a scene of horror.  Dead and dying men littered the ground.  The groans of the wounded were heard in every direction causing one of Lieutenant Colonel William Chronicle’s men, James Potter Collins, to tear up and exclaim, “Great God! Is this the fate of mortals?”

The corpse of the infamous enemy commander drew particular attention from the Overmountain Men. Major Patrick Ferguson, who had threatened to lay waste to their homes with fire and sword, was treated with “every insult and indignity” by the mountaineers before he was rolled into a shallow grave next to his slain consort Virginia Sal. James Collins examined Ferguson’s body before this was done and noted that Ferguson’s hat and uniform were so shot to pieces that up to fifty musket balls must have been fired at him with seven passing through his body.

Campbell felt it was too late in the day to move, so the remaining men of both armies camped on the battlefield that night.  The next day the Loyalist prisoners were formed up and marched from the field by the main Patriot force at 11:00 am.  Two hundred Patriot militia remained behind to bury the dead and care for the wounded.  They took pains to inter the Patriot dead in secure graves, but the Tory dead were halfheartedly given shallow graves some getting not much more than a sprinkling of dirt, a few rocks or an old log to cover them.  This burial detail left the battlefield that evening and caught up to the main column that night.  The poorly buried Tory corpses attracted scavengers, dog, hogs and even wolves.  The wolves made the mountain a dangerous place to be for weeks afterwards. More than one dog had to be destroyed for going “mad” and many a farmer allowed his family to go hungry rather than feed them the pork fattened on such an unholy meal.

The Patriot army moved out of the area quickly hoping to get beyond the reach of British reprisals launched by Lord Cornwallis and Bloody Banstre Tarleton.  Unbeknownst to them, Cornwallis was already retreating back into South Carolina after receiving news of Ferguson’s destruction and exaggerated rumors that it was carried out by a force possibly numbering as many as ten thousand men. 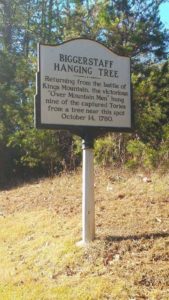 Historic Marker at the Hanging Tree location in Cliffside, NC

By the time the Patriots reached Biggerstaff’s Plantation near the mouth of Cane Creek on October 13th, they felt secure that they were no longer in immediate danger.  At this point, their minds turned to retribution, or in their eyes, justice.  Word had reached the group that after Elijah Clarke’s failed siege of Augusta, Georgia, the British had hanged several captured Patriot prisoners.  The North Carolina Colonels suggested to William Campbell that they put the worst of the Tories that they had bagged at King’s Mountain on trial.

Benjamin Cleveland was a magistrate and could serve a civilian judge of the trials while the jury was made of 12 Patriot officers. The worst offenders were identified and charges were drafted that included accusations of treason, murder, horse theft, arson and more.  The trial commenced on October 14th.  They convicted 36 Tories and sentenced them to death by hanging.  A few of those convicted had Patriot friends and acquittances that stepped forward and advocated that they be pardoned.  Colonel John Sevier pardoned Samuel Chambers and James Crawford, the two men who deserted and betrayed the army’s advance to Ferguson.  Likewise, Quaker Meadows Joseph McDowell had area resident Arthur McFalls spared due to his good service as a scout in the Cherokee War.  But he failed to get leniency shown to Arthur’s brother John, who also lived in the region.  John McFalls had visited the home of Martin Davenport (who would move into the Toe River Valley after the war).  Finding Martin absent, John ordered Martin’s son to feed his horse.  When the boy refused, John cut a limb and whipped the young boy.  Benjamin Cleveland who knew the Davenports well said that such an outrage could not go unpunished.

Night had fallen by the time the trial had ended, but the condemned were not spared by the darkness.  The army lit torches and marched them to a large oak tree in groups of three. Colonel Ambrose Mill (who was charged with inciting the Cherokee to attack the frontier of South Carolina), Captain Robert Wilson, Captain James Chitwood, Captain Grimes, Captain Walter Gilkey, Captain John McFalls, Lt. Thomas Lafferty, Lt. John Bibby and Lt. Augustine Hobbs all met their fate at the end of a rope that night.

The remaining condemned prisoners had their sentences commuted and were spared. As the army marched away from the grisly scene, the widow Martha Biggerstaff whose Tory husband Aaron had been killed at King’s Mountain emerged from her home and cut the bodies down from the tree.  She buried 8 of them, all but Chitwood whose family arrived to claim the body, in a shallow trench nearby.

The Patriot column moved northeast with its load of prisoners towards a Prisoner of War Camp that had been established in the Moravian village of Bethabara just outside of modern-day Winston-Salem.  Along the way, several of the Tory prisoners were killed attempting to escape, but quite a few more managed to successfully slip away unnoticed.  Some, like Lt. Anthony Allaire, rejoined the British army, but most of those that escaped had had their fill of the war and did not rejoin the fighting.  Surprising to a modern listener, but unsurprising to a contemporary observer of the time who knew the fickle nature of loyalty, a large number of the Tory prisoners enlisted in either the Patriot militia or the Continentals and gave good service.  After the war, when these Tory prisoners of King’s Mountain who joined the Patriots applied for pensions from the United States, they wisely left out what they did at King’s Mountain off their applications.  Arthur McFalls, who only avoided the hangman’s noose at Biggerstaffs due to the intersession of Joseph McDowell, was one of these who joined the Patriots and was granted a pension for his service in the cause for independence.

Footsteps for Freedom: The Road to Kings Mountain is a production of the Mitchell County Historical Society, a non-profit organization committed to the preservation of the history, heritage, and culture of Mitchell County, North Carolina. Today’s program was written by Jonathan Bennett and narrated and produced by David Biddix. Special thanks to WTOE radio in Spruce Pine, North Carolina (1470 on the AM dial) and WKYK Radio in Burnsville, North Carolina (940 on the AM dial) for airing our program. You can also download episodes through Apple Podcasts, Google Podcasts and other pod catching software. Learn more at mitchellnchistory.org/ovm.

The Mitchell County Historical Society offices are located in the Historic Mitchell County Courthouse in Bakersville. We’d love for you to become a member of our Society! You can learn more about us on the web at mitchellnchistory.org. There, you can also see show notes about today’s epis ode, links to online resources about the Battle of Kings Mountain and those involved in it, and much more about Mitchell County’s history and heritage. You can also visit us on Facebook. Join us next time as we discuss recovery from wounds and a famous death in our region.