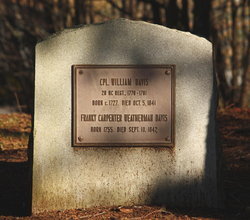 As we conclude our series on the Battle of Kings Mountain, we thought we would take some time to note a couple of veterans of the battle that ended up in the Toe River Valley, along with ones from other battles that are buried in our area. One of the soldiers who fought at Kings Mountain and is buried in the region is William Davis of Three Mile Creek in Avery County. 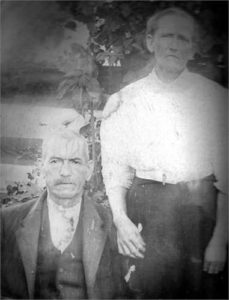 Reuben and Myra Davis Woody. Myra is the great-great granddaughter of William Davis, the oldest veteran of the Battle of Kings Mountain. Reuben Woody was born on March 6, 1854. He married Elmira Davis in 1870. They had 16 children in 30 years. He died on May 24, 1925, at the age of 71, and both buried at Lily Branch Cemetery in Bakersville, North Carolina.

According to Uncle Jake Carpenter, who recorded every death in his community, wrote this in his notebook about Davis:  William Davis age 100.8 dide oc 5 1841 ware old Solder in rev wre and got his thie brok in laste fite kinge monte he wars farmer and made brandy and never had Drunker in famly After the Revolutionary War, Davis moved to Three Mile Creek where he lived to be 116 years old and is buried alongside Highway 194 just before it starts up Three Mile Mountain. (It is thought that Uncle Jake probably didn’t know how to write one hundred and sixteen, but recently vetted records have indicated that William Davis was the oldest veteran of the Battle of Kings Mountain.) Martin Davenport did not fight at Kings Mountain, but he is involved with the battle as it was an incident between his son and John McFalls that eventually resulted in McFalls’ execution after the battle. John McFalls had visited the home of Martin Davenport (who would move into the Toe River Valley after the war). Finding Martin absent, John ordered Martin’s son to feed his horse.  When the boy refused, John cut a limb and whipped the young boy. Benjamin Cleveland who knew the Davenports well said that such an outrage could not go unpunished, therefore McFalls was executed. Davenport also fought in the Cherokee wars and worked with other military units in Burke County. In 1785, he moved near Davenport Springs (which he owned) where he lived until his death in 1815. He is buried near Robert Sevier in Bright’s Cemetery.

Of course, Jonathan Tipton settled in the Toe River Valley after the war (with the Tipton Hill community being named for him), but he left after living in the area for nearly 30 years and is buried in Tennessee.

Here is a list of Revolutionary War Veterans in the Toe River Valley: