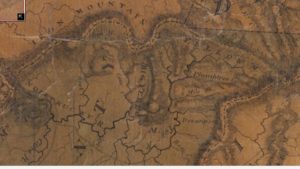 “First Actual Survey of the State of North Carolina Taken by the Subscribers Jona. Price, John Strother.” 1778 (Courtesy of the UNC Maps Library)

Three prominent family names from the Toe River Valley are closely associated with the Battle of Kings Mountain: Wiseman, Baker, and Davenport. Their personal relationships began along the James River in Virginia and continued to North Carolina along the Johns River in what is now Caldwell County and finally to the Toe River Valley. When the Overmountain Men came over Yellow Mountain, their path ran directly through the home places of two of these three families and, according to tradition, after the battle returned through all three.Family traditional stories, familiar to many in the Valley, conflict with contemporary researchers regarding the Wiseman family. This interesting chapter of our history will be explored more fully later; however, the evidence clearly indicates that all three families contributed in many ways to the Revolutionary War effort, including joining the Overmountain men as they came through. According to existing documents, Thomas Baker married Dorothy Davenport, daughter of Martin Davenport Sr. and Dorothy Glover, around 1734 in Hanover County, VA. William Wiseman married Mary Davenport, daughter of Dorothy’s brother Thomas around 1761 in the Culpeper area of VA. All three of the families ended up together in Burke County, including Martin Jr., and by 1778 were at home in what is now Mitchell and Avery Counties. Historians such as Bobby Gilmer Moss suggest that many of the men who made their way to the Battle of Kings Mountain or contributed directly to it in other than military ways appear in a wide range of documents, accounts, and family histories, but may not be listed in “official” documents. William Wiseman Sr and his son Thomas are most likely examples. It is apparent, however, that the 44-year old William along with his 17-year old son joined the Overmountain men as they came directly through their property along what is now Highway 19e which covers William’s grave just over the Mitchell/Avery line. The family story says that William went along in his wagon and served as a cobbler and blacksmith; he would not take up arms but supported the effort in critical ways. There are two sets of Davenports of note related to the Battle of Kings Mountain: the Pamunkey, VA, Davenports related to the Bakers and Wisemans and a group from the Shenandoah of Virginia and Pennsylvania. The latter ended up in South Carolina and were all Tories. One served as the King’s Magistrate for the district and his mill was headquarters for the British Army, including being the staging area for campaigns against the Rebels in the backcountry. Several served in the King’s Loyal Militia, received British Army pay, and one was among the British troops captured at the Battle of Kings Mountain. According to Lyman C. Draper’s accounts, Tories looking for Martin Davenport Jr. came to his home while he was away. Not being able to capture him, they took their frustrations out on his 10-year old son William by beating him severely. This enraged not only Martin, but was communicated to the folks over the mountain, adding fuel to the rebel fires. Captain Martin Davenport assembled and led his company of the Burke County, NC, Militia to Kings Mountain and distinguished himself in the battle. At a quickly convened drumhead court martial held within 24 hours of the Battle, the Tory culprits who beat young William were convicted and summarily hanged. Davenport Gap in the Great Smoky Mountains on the North Carolina-Tennessee border was named in honor of Colonel William Davenport who led the survey crew that established the State boundary in 1821. Charles Baker, son of Dorothy Davenport and brother of David Baker joined the Burke County Light Horse Militia. He was a successful figure in the skirmish at Pacolet and the Battle of Kings Mountain. After the battle he guarded British prisoners taken to the Moravian towns. None of the Tory Davenports fled with the British when they withdrew in 1782. Instead they remained in place, took amnesty, and became good citizens; however, it took several generations before they were allowed to resume the public roles and stature they had before the Revolution. The Davenport Mill was burned, never rebuilt, and ultimately the land, prime and an ideal mill location, was sold out of the family. Life returned to normal for the three intertwined families in the Toe River Valley with each adding significantly to its future. Many more stories can be told about their contributions, but one of the most important is this critical role they played in the successful Battle of Kings Mountain.