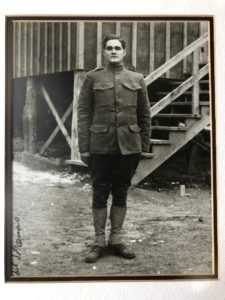 Cloyd Decatur Thomas, born 11/21/1894 in Mitchell County, was the son of William Malone Thomas (1871-1945) and Amanda (Thomas) Thomas (1875-1957).  When he registered for the draft in June 1917, Cloyd listed his occupation as farmer and laborer at a clay company at Bandana. Thomas served in the 81st Infantry Division, attaining the rank of sergeant. According to information obtained by Jonathan Bennett, MCHS researcher and consultant, the 81st Infantry Division “Wildcats” were organized as a National Division of the US Army in August 1917 at Camp Jackson, SC; our nation had entered the conflict in April 1917.  The division was originally organized with a small cadre of Regular Army officers, while the soldiers were predominantly Selective Service men drawn from the Southeast. After completing, the 81st Division deployed to Europe, arriving on the Western Front in August 1918. Elements of the 81st saw limited action by defending the St. Dié sector in September and early October. After relief of mission, the 81st Division was attached to the American First Army in preparation for the Meuse-Argonne Offensive. In the last days of the Great War, the 81st Division attacked a portion of the German Army’s defensive line on 11/9/1918 and remained engaged in combat operations until the Armistice with Germany at 11:00 on 11 November 1918. After the cessation of hostilities, the 81st Division remained in France until May 1919; after which the division was shipped back to the US and deactivated on 6/11/1919. A couple of years after his return to Mitchell County following the end of the war, Cloyd Thomas married on 3/13/1921 to Pearl Greene (1902-1996).  They were the parents of 9 children, daughters Lucille Howell, Merle Elizabeth Wilson, Virginia Belle Byrd, and Louise Weeks, and sons Jack, William Bruce, Robert, James, and Daniel. According to granddaughter Jan Hamilton, four of Cloyd’s sons “served in the US armed forces to serve their country during World war II, Korean, and Vietnam.” Jan Hamilton and her grandfather would frequently sit on the porch and talk when she was growing up. Once, telling him how much she liked her French class, Jan said they shared a chuckle when her grandfather claimed to remember only one French word – couchez, which translates “sleep!”  Jan recalls that he said his gun was once inspected by General John J. Pershing, commander of the American Expeditionary Force. Cloyd Thomas died 11/13/1975 in Mitchell County and is buried in Mine Creek Baptist Cemetery.  His marker notes his service in World War I.

323 rd Infantry at Newport News, Virginia after the arrival on USS Walter A. Luckenbach, 1919