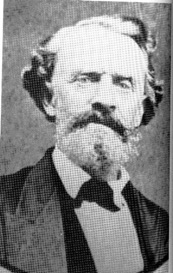 The Rev. George Washington Martin
The Bakersville United Methodist Church had its beginnings as “The Bakersville Methodist Society” in 1871. Early in the history of Methodism, John Wesley encouraged itinerant preachers he commissioned to establish Methodist societies as he had done within the Anglican Church in England.
The Society became recognized as the Methodist Episcopal Church, South, and congregation leaders John Heap, Elisha Clapp, and John Rorison petitioned the Holston Conference in 1873 to send an ordained minister. Perhaps with a recommendation from Rev. William Clayton Bowman, his friend in whose second wedding he had been a groomsman, George Washington Martin was appointed. Rev. Martin had been a minister in the Burnsville Circuit since 1869 and lived in the Caney River Township with his second wife Nancy J. Cox Martin, his 16-year old daughter, Celia, and his 22-year old son, Mitchell. His first wife, Rebecca Perkins, had died in Grayson, VA, in 1857.
Rev. Martin was born in Wythe County, VA, 2/10/1821, professed religion, joined the Church in his 8th year, became licensed to preach at 21, and became an itinerant preacher remaining at home to care for his parents. In 1845, he married Rebecca Perkins, daughter of Mr. Timothy Perkins, of Grayson County, VA. After 12 years of marriage and giving birth to 3 children, she died.
In 1863, Martin was admitted on trial in the Holston Conference and appointed to the Mechanicsburg Circuit, With success he was ordained and went on to the Princeton, Watauga, Burnsville, and Asheville Circuits. The Bakersville Methodist Society was a part of the Burnsville Circuit, so Rev. Martin was well known in addition. While a minister in the Burnsville Circuit, he helped a congregation build their first church building around 1866 near present-day Newdale, which was named Martin’s Chapel in his honor. Apparently with the help of the Bakersville community he built a house on Water Street located near where the Mitchell County Administration building stands today. It was washed away in the May 1901 flood.
Rev. Martin performed a church service in Bakersville, Tuesday night, 3/30/1875. On Wednesday afternoon, passing by Jacob Weaver Bowman’s saw mill, he saw the miller struggling with a band that had been thrown off a wheel. He began helping the miller, but lost his footing and was thrown among the wheels, mangling his body and crushing his head. In a deep coma for 2 days, he came out and clung to life for 10 more days. During that time he remained in prayer and asked Rev. Bowman and a woman named Molly to sing for him. The last before his death was “Foot Steps of Jesus.”
On 4/11/1875, he consoled his wife Nancy and daughter Celia, telling them that if the Lord would permit he would be their guardian angel, and took his last breath. A brief service was performed at his house by the Rev. E.H. Hampton followed by a huge procession to what’s now the Bakersville Historic Cemetery, where he was interred with full Masonic Honors by the Bakersville Lodge.
Special recognition/thanks for W. Hicks article from the Holston Annual, 1875, and reprint of Rev. W.C. Bowman’s obituary from the Bakersville Independent included in Lloyd Bailey’s History of the Methodist Church in the Toe River Valley.