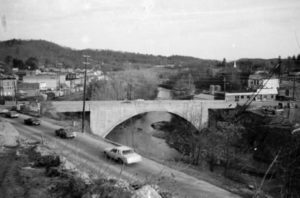 Although it is difficult to see in this 1984 picture, work had begun on a new bridge to span the North Toe River and the railroad tracks in Spruce Pine.

This downtown landmark, labeled the “bottleneck bridge”, was built in 1922. At that time, it was the intersection of NC 226 and US 19E, as the Minpro bypass had not yet been built. Traffic congestion was a nightmare at times, not only because of the large number of vehicles, but also due to the narrow bridge and tight turns. The “new” and current bridge was opened in 1986 and the iconic arched bridge was then torn down. There have been other bridges that forded the Toe River near this location. Some old newspaper writings suggest that there was a passage across in 1901, and it then being washed away in a flood. There was a large metal and wooden bridge that was constructed sometime after that. It was washed away in the great flood of 1916. There are pictures of the 1916 bridge and the abutments for that bridge can still be seen upstream from the current bridge. What did travelers do between times when there was no bridge? One can only assume there was a low-water bridge to cross. And it had been said that during the winter the river would freeze thick enough so that crossings could be made. There is only some concrete visible from the old 1922 bridge left, but fortunately when it was torn down, beginning in 1986, Mr. Robert Stroup, Sr. saved more than a piece of concrete.  There were two bronze plaques at each end of the bridge. And although the abuse of 64 years of traffic had taken its toll, he was able to obtain a piece of our town’s history from the company razing the old bridge. Thanks to his son, Luther Stroup, that plaque was given to the Mitchell County Historical Society, where it can be preserved for future generations. We are grateful to him for that donation. 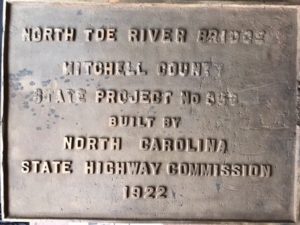 Bronze plaque from the North Carolina State Highway Commission saved during the demolition of the 1922 bridge spanning the North Toe River in Spruce Pine.