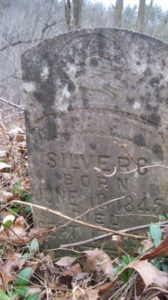 Samuel Silver was born near Micaville, NC in March 1854 to an unknown enslaved mother belonging to Green B. Silver. In 1860, Silver had 9 enslaved people including 5 children ages 2 months to 10 years. At that time there were 21 enslaved people of African descent living in what is now Mitchell County.

In 1900, there were 11 families and 59 individuals of African descent living in the Town of Bakersville including Samuel, a widower, who had moved to Bakersville with his children Melvin and Nellie. Soon after he married Harriet (last name unknown and 12 years his senior). Ten years later they were living on Academy Street. He was a farmer, owned his own home, and could neither read nor write. By 1920, he had mortgaged his home, Harriet had passed on and was buried in a cemetery in what is known today as Loafers Glory, and he was living alone.

By 1930, Samuel Silver was the only person listed as being of African descent living in Bakersville. He was known and liked by many who referred to him as “Uncle Sam.” He owned his own home that was located on the Toecane Road within easy walking distance of town. He lived alone, worked as a farm laborer, and did not own a radio. Someone had given him a silver watch of which he was very proud and bragged on its accuracy. He held the position of sexton for the second Bakersville Baptist Church for several years and “almost every week was standing at the church with the bell rope in hand waiting for exactly 10 am to begin Sunday School.” Perhaps he attended the service sitting on the back pew.

Sam was such a regular face in Bakersville that on March 6, 1932 he was missed and neighbors went to his house and broke the lock to find him lying beside his bed barely breathing. Dr. G.P. Bingham was unable to revive him. They placed his body in a casket and took it to the Bakersville Baptist church to lie in state while the men held a wake overnight. The next day, Rev. C.L. Hunt conducted the service in the church which was reported to have been filled with people from the Town. Melvin from Erwin and Nellie from Bristol were able to make the trip in time to attend his burial service beside Harriet.

Stories of a beautiful collection of Carnival Glass that Sam and Harriet had collected over the years have been told; however, no one has been able to account for any of it after his death. On the other hand, he was buried with his silver watch. Unfortunately that cemetery is so neglected that locating his and Harriet’s resting places remains a challenge and a disgrace.

Gratitude to Helen McBee for her local history notes and documents and to Mary Lee Barron for her everlasting stories. Also used: Ancestry.com, Mitchell County Register of Deeds, the US Federal Census—Slave Schedules, and US Federal Census records. Any factual errors are the writer’s.