First of all, apologies for missing Monday’s post. I had to travel to my workplace at Western Piedmont Community College to pick up some things as we continue to telework for April per Governor Cooper’s Stay At Home order.

I had a couple of observations to make about my trip, which occurred in the final hours before Stay At Home went into effect. First, Monday, March 30 was a beautiful spring day…which made the lack of traffic on the highways and people at businesses even  more odd.

As I was traveling on I-40 between Spruce Pine and Morganton, I was surprised at the number of Highway Patrolmen sitting every three or four miles on the road. They weren’t stopping people (at least while I went through), just watching traffic. It was an uneventful trip other than the fact that the building I work in was locked (someone had to let me in) and there were only a few people in the building to gather items they needed. 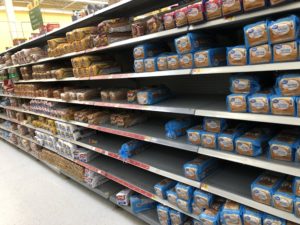 Bread is available without restrictions at Walmart.

When I got back home, it was time for a quick stop at Walmart to pick up a few things. I had snapped a photo of the sign outlining the items that had limited purchase amounts but for some reason, it didn’t save on my phone (at least I haven’t located it yet). I’m going to try and get a copy of those types of signs at local merchants for the journal soon to capture a scene that really hasn’t been repeated since World War II. Of course, items like hand sanitizer and disinfectant wipes were nowhere to be seen, as were jugs of bleach. One item in short supply that was somewhat of a surprise (at least to me) was trash bags, There were only three or four boxes on the shelves.

The real surprise came on the bread aisle. When I went to Walmart and Ingles last week, there were few loaves available, and there was a limit on what you could buy. On March 30, Walmart had the bread aisle fairly well-stocked (see photo) and the limits on purchase were gone. 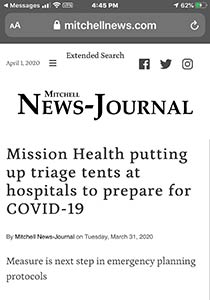 That gets me to day. We have just finished our first full day of Stay At Home in North Carolina. Neither I or anyone in my family have been out. I teleworked from home until 5:00 p.m., then set about composing this entry. Today, North Carolina saw increase in cases and deaths from COVID-19 and we are told by officials that the worst is yet to come. As the story stated, the practice of establishing triage tents is standard among healthcare facilities needing to isolate cases of infectious diseases. So, they are just preparing for what many feel is coming later this month.

Will the measures that government has taken to restrict travel, movement, and gatherings of more than 10 people help stem spread of COVID-19. Public health officials say yes as long as everyone follow the instructions and just stay at home. Is that easy to do? Absolutely not! But it is something that many are now heeding as the United States has now surpassed China in the number of reported cases and deaths from the virus.

We all have to pull together and work to stem the spread. Let’s hope more draconian steps have to be taken to restrict movement and that everyone listens to reason.

We Want to Tell Your Story

If you have stories, images, or videos that you would like to include in The Corona Times, please e-mail mitchellnchistory@gmail.com with your stories and files for inclusion. If you have problems sending us videos, please e-mail and we will make arrangements for you to upload the video to us.

You will note a series of numbers contained in the blog. They document the spread of virus through confirmed cases by the federal Centers for Disease Control and by the North Carolina Department of Health and Human Services. These are the official totals provided by state and local government at the date of the post and do not include estimates or cases not confirmed by these agencies. This is our effort to provide an accurate gauge of confirmed virus spread as it continues during the pandemic.