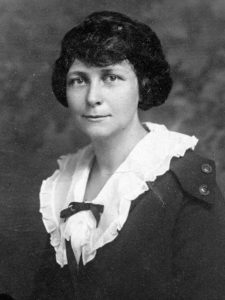 Ruby Juanita Sisk was born December 18, 1898 in Franklin, North Carolina to Ray Dean and Emma Lou Guy Sisk. Her father was a successful attorney, state senator, and highly respected community citizen.She was an honor graduate from Woman’s College, UNC, which is now UNC Greensboro, and completed graduate work at UNC Chapel Hill and Peabody in Nashville.Ruby was principal of South Rosemary School in Halifax County, NC 1920-1921; taught first grade one year in another Halifax County school, Hobgood, in 1921; and in 1922-1923 served as principal of South School in Mooresville. She had close friends during these years, Margaret Hayer, Nita Andrews, and Mamie Leeper, with whom she remained in contact and often traveled with for many years.

Sometime during her early career, Ruby came to the attention of Mitchell County Superintendent Jason Deyton. Educational reform was just getting started nationally, and new approaches to learning and teaching were being embraced by Superintendent Deyton and his faculties. He was in the process of making dynamic changes in area schools and believed Ms. Sisk was just the person he needed; he was right.

At the end of the 1923 school year Ms. Sisk bid goodbye to the folks at South School, boarded a train, and came to Toecane. Ruby then took a hack to Bakersville over the only “improved” road in the county and took up residence in the Gudger House. She formed a strong bond with the Gudger/Miller family that lasted the remainder of her life.

When she reported to his office, Mr. Deyton informed her that in addition to being School Supervisor, she also had the duties of attendance and truant officer as well as county welfare officer. After showing her a map of school locations and reviewing the regular visits she was expected to make, he suggested that she purchase a good horse and saddle. She did.

Apparently, she should have remained with the horse, because in mid-August, Miss Sisk was in a car accident near Bakersville in which her collarbone and several ribs were broken. It has been speculated that Dr. Arthur Edward Gouge attended to her locally; however, she was taken to Longs Sanatorium in Statesville. She recovered fully and came back to Bakersville.

Ruby had become very homesick, reaching the point that she wrote a letter to her father that she might have made a mistake and intended to come home. But Dr. Gouge was a handsome young widower whose first wife, Carrie Pritchard, died while he was serving as an Army Surgeon on the front lines in WWI. The couple fell in love and were married on October 18, 1923 in Marion by the Rev. J.T. Bowden, witnessed by her parents, Ray and Emma Guy Sisk. Their love and marriage lasted over a half century.

Most of the schools in Mitchell County had only one teacher, most likely with limited formal education, little if any instruction in teaching methods, and often very set in their ways. With Ruby’s kind and caring manner, even the most reluctant among them realized that she really was there to help them, and they responded to her efforts.

In 1936 the Gouges purchased the Bailey property on North Main Street in Bakersville, removed the old dwelling and built a fine white house. Ruby’s father died in 1937 and her mother came to live with them. Life was apparently very good for all. Mrs. Sisk passed in 1955.

Over the years, Ruby served Mitchell County as an eighth-grade teacher, first-grade teacher, Director of Teacher Training, principal of a primary school, and again School Supervisor. The latter position she held for the last 12 years of her career.

Ruby started the Mitchell County Public Library, second only to the Wing Library which had ceased to exist, and served as its Director, with the collection housed in the Judge’s Chamber of the Mitchell County Courthouse in Bakersville. She was a member of the local and regional library boards for many years as well as teacher of an adult Sunday School class. She was a favorite of the local town children, whom she referred to as “Our Gang on the Hill.” They referred to her as “Sisk,” visited the Gouge house regularly for parties, and went on field trips and picnics in the nearby “Bailey Holler.” Doubtless she had a profound influence on these children including James and Robert Lee Blevins, Mary Lee Buchanan Barron, and Mary Carlton Miller, who all became educators of note. Countless others over the years benefited from her time, talents, and commitment to the people of Mitchell County.

Arthur and Ruby lived happy and productive lives for 52 years in Bakersville until his death at 84 in 1975 and hers at 89 in 1988. Gouge Elementary School is named for both of them and they rest in the Bakersville Memorial Cemetery.

Special thanks to Walter Thomas, Mary Lee Barron, and Ruby Sisk Gouge for documents and stories.