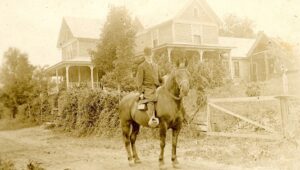 First, a word about the Butt surname. Some researchers have traced the first Butt settlers in America to Dutch origin, with the name spelled Butz. However, in a reliable source entitled Names through the Ages, the name is seen as English, derived from Butler, meaning “keeper of the bottles.” In time, the final syllable, er, was dropped and another t added, making it Butt; then, in more recent years, probably going back to the Dutch sound of Butz, the surname has a common spelling of Butts.

Virgil Roscoe Butt was the eighth son of John and Sarah Hartley Gordon Butt born September 13, 1855 in Blairsville, Georgia. His Grandfather John Butt Sr. who was born in Virginia, came down thru North Carolina to Pendleton, South Carolina and then on over to Habersham County, Georgia.

Virgil’s brothers included Captain Thomas Jefferson Butt, Captain William Greenberry Layfayette Butt, and Corporal James Allen Butt all who served in the Confederate Army. James Allen, wounded in Virginia and in the Battle of Atlanta, was named for his Uncle James Allen Butt who was killed during the Second Seminole War in 1837 in Tallahassee Florida where he is buried.

The last record of Virgil in Georgia is the 1870 census listing him as being at home. The next available record is Virgil (24) in the 1880 census as living in the town of Marion with his wife Dollie E (20) and his occupation is physician. The intervening years included having attended Princeton University and Emory Medical School.

How Virgil came to Marion is not known at this time; however, he and Dollie Electra Brown were married 17 April 1880. Dollie’s father was John Seawell Brown, son of Samuel Brown and Olive Cox, who was a captain in the home guard during the Civil War. The John S. Brown family were the first owners of the Carson House at Pleasant Gardens when it passed from the original Carson Family owners.

The 1900 census shows that Dollie was the head of the household in the Township of Marion with five children. It also shows that Dr. Virgil R Butt (44) was living in the Bakersville Township with his wife Mary Gertrude McNelly (23), two children, and a servant Martha Higgins (18).

Gertrude was the youngest child of James R. and Catherine McCall McNelly of Marion. She and Virgil were married 9 May 1896 in Gertrude’s mother’s home located on the lower part of the North Fork, Marion by J P Cansler, Justice of the Peace, and witnessed by J.S. Nichols and J.S. Grant. Apparently, Virgil was living in Spruce Pine at the time of the wedding. The couple had nine children between May of 1897 and April 1910: Katie Mariene, James Eugene, Clarice, Vivian, Ethel, Paul Atlee, Vivian, Muriel Athleen, and Thomas Woodrow. Clarice and Vivian died at an early age. The first son was Eugene who was named for Virgil’s uncle and their last child was Thomas Woodrow named for Virgil’s good friend at Princeton, Woodrow Wilson, 28th President of the United States. Virgil was invited to his first inauguration which he attended.

Beatrice Teague Banner was a young girl in Bakersville, who wrote a remembrance of this in 1968. “Dr. Butt, one of President Woodrow Wilson’s classmates at Princeton, was invited to the Capitol to attend the festivities. I can see him now as he walked proudly past the Stafford House, dressed in his high top hat and swallow tail coat, preparatory to riding Byron Young’s hack to Toecane, and the C C & O to Johnson City, Tennessee, and the Southern R.R. to Washington, D.C.”

Perry Dean Young tells the story in Hanged by a Dream of the murder of Peggy Effler in which Dr. Virgil R Butt was the major factor in determining that it she had been beaten to death by her husband Steve Effler on 19 January 1881. His examination and testimony at the trial resulted in Effler’s conviction and hanging on 24 May 1882 in Marion.

It was noted in newspaper accounts in 1887 that he assisted Capt. A L Finlay in the capture and arrest of Douglas Higgins who was evading the law and began shooting at them and others. Also in 1887 he saved George S Elliott’s life who cut an artery in his right thigh during a fight with William Davis by stopping the bleeding. He also was the consulting physician at the railroad camps building the line to Marion in 1902.

Dr. Butt was an active member of the Democratic Party and an active member and contributor to the Bakersville Methodist Church congregation as indicated with a stained glass dedicated to him and his wife Gertrude in the current and second church building.

About 1905, Virgil purchased land from John Gudger and built a beautiful home on what is now South Mitchell in Bakersville. Later, on the same footprint, he built the current white column house. He rode the roads and trails on his faithful horse Sal to care for people all thru Mitchell County

Dr. Butt died in 1932 and rests on the hill overlooking Bakersville beside his children Clarice and Vivian along with his son Virgil Gordon’s wife Martha.

Gertrude McNelly Butt died January, 3 1948 and is buried in the Bakersville Memorial Cemetery.

Special thanks to Ethelene Dyer Jones, Through Mountain Mists: Early Settlers of Union County, Georgia, published May 22, 2008 in The Union Sentinel, Blairsville, GA.