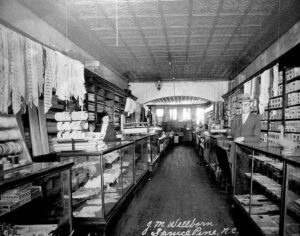 Two of the oldest stores in Spruce Pine shared an intertwined history during their existence. Robert Shell (R.S.) along with his wife Annie McCall opened his first store in 1914, moving to several locations before settling downtown in the Peterson Building. In 1928, Joseph Marion (J.M.) Wellborn came to Spruce Pine from Watauga County and bought McCall’s store, prompting him to move down the street and open again. Wellborn’s moved twice, ending at its final location next to McCall’s in 1938. The two stores continued separately until 1988, when Shell McCall, son of R.S., retired and once again sold the McCall’s store to John Wellborn, this time John, son of J.M. Wellborn. John and his wife Scottie operated them separately until their retirement in 2007, when they were closed. John Wellborn passed away June 18, 2020, leaving a lasting legacy to Spruce Pine as being one of it’s greatest supporters for decades.