The Pandemic and Community Events in Bakersville 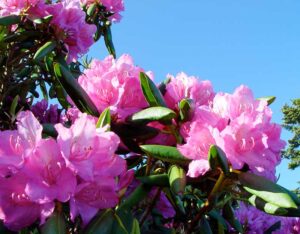 The US Forest Service opened the gates on the road to the Rhododendron Gardens in mid-June. They had been closed earlier. Rhododendron Festivals in North Carolina & Tennessee were cancelled this year due to COVID-19.

Restrictions for gathering both external and self-imposed has been difficult especially for those who enjoy sponsoring and participating in traditional community events.

In Bakersville that has meant no Easter egg hunt with lunches for children; cancelling the Troutacular fishing event for children and teenagers; postponing the 74th North Carolina Rhododendron Festival with its pageant, car show, road race, and street dance; and not allowing the Town-Wide Yard Sale.

The 4th of July fireworks display will go on as usual, except that people are to remain in their cars which many believe few people will adhere to. Bakersville will have the only fireworks display within a hundred miles meaning that the town most likely will be inundated. The Baptist Church began services with every other pew blocked and social distancing encouraged. The services are shown over the internet for those wishing to remain at home. At the time of this writing, fall festival schedules have not been verified.

So This is Not Going As Planned 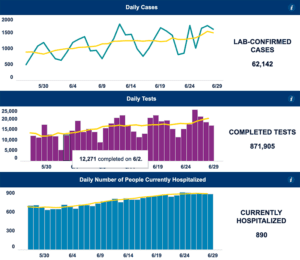 So back in early May, COVID-19 infections had begun to show signs of leveling off and that, combined with the need to start bring the economy back to some semblance of normalcy, prompted state officials to look at a 2-step phase of re-opening society. The first phase, beginning in mid-May, slightly loosened the restrictions of gathering and allowed some businesses to begin reopening. Governor Roy Cooper cautioned everyone that testing and monitoring of infections and hospitalizations would be stepped up and that would determine if Phase Three of re-opening would take place in early July.

So, here we are at the end of June and the number of infections and hospitalizations have continued to increase after the relaxation of regulations that were put into effect in March and April. That prompted Governor Cooper to announce this past week that the move to Phase Three has been postponed until mid-July at the earliest, and he announced that masks are mandatory in public spaces and at most work places.

This of course has caused lots of push back from some segments of society, claiming that personal liberties are violated by calling for the mandatory use of masks. Others feel the Governor did not go far enough in restrictions so infections (and deaths) will continue to rise.

One thing is for sure. Infections are continuing to rise, with records set several times in North Carolina in the past two weeks. The use of a mask, combined with social distancing and consistent washing of one’s hands are a small price to pay if we as a society can keep the virus at bay until an effective vaccination can be developed.

A balance between protection of the public’s health and the re-opening of economy has to be found, but the steps taken so far haven’t worked. Individuals have to step up and do our part to help curb the spread.

We Want to Tell Your Story

If you have stories, images, or videos that you would like to include in The Corona Times, please e-mail mitchellnchistory@gmail.com with your stories and files for inclusion. If you have problems sending us videos, please e-mail and we will make arrangements for you to upload the video to us.

You will note a series of numbers contained in the blog. They document the spread of virus through confirmed cases by the federal Centers for Disease Control and by the North Carolina Department of Health and Human Services. These are the official totals provided by state and local government at the date of the post and do not include estimates or cases not confirmed by these agencies. This is our effort to provide an accurate gauge of confirmed virus spread as it continues during the pandemic.