Ringing the Bells of Bakersville 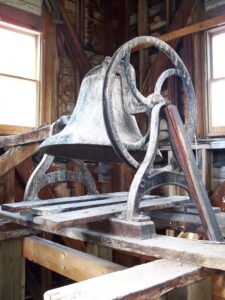 The historic bell hanging in the 1907 Historic Mitchell County Courthouse.

The first large bell in Bakersville is the one in the Historic Courthouse today, which, we are told, was the one that rang from the belfry of the first Mitchell County Courthouse built in 1868. Photos of the 1868 courthouse show clearly a belfry and the design of the bell today matches the designs of cast bells from the 1860’s.

The Bakersville Methodist Church beginnings came from a group of people who met Methodist circuit riders as early as 1814 in David Baker’s log cabin located about where Dr. A.E. Gouge and the former B and B house stands in Bakersville. His cabin apparently continued to provide the meeting house until 1868 when apparently the group began meeting in the newly built Courthouse, perhaps called to worship by that bell. In 1871 the group organized themselves as the Bakersville Missionary Society.

The Courthouse bell probably rang to call Baptists to a reported revival meeting held there in 1868 where discussions began regarding the formation of a Baptist Church for Bakersville. This proceeded with no animosity toward the Roan Mountain Baptist Church, where most of the individuals at the revival attended, but rather expressing a more positive desire to create a local church for the community. The Baptists apparently continued to meet in the Courthouse.

In 1878, Stephen Morgan Collis at the Roan Mountain Baptist Association meeting, made the motion to take up a subscription to build a church in Bakersville. Mr. Tom Greene’s success in the mica mining industry allowed him to donate the land for the first church which was built on or near the property where Henline-Hughes Funeral Home sits today. Mr. Greene, in addition to the land and his significant contributions to building the church, provided funding for a bell.

That bell was cast about 1871 by the Blymyer, Norton & Company of Cincinnati which later became the Cincinnati Bell Foundry Company. The Bakersville Baptist Church bell is similar in shape to the Freedom Bell manufactured by the same company which currently rings from the restored First Baptist Church of Williamsburg. That church traces its history back to 1776 when enslaved and free African Americans met in secret to worship on the own terms. The bell was taken during the church restoration process to ring at the dedication of the Smithsonian’s National Museum of African American History and Culture.

The Baptist bell rang to call the congregation to meeting, to recognize a death in the community, and on the night of 27 May 27 1901 it rang as the church was washed away down Cane Creek in that devastating flood. Later, according to one historian, the bell was recovered by Mr. Tom Greene.

It then was placed in the second Bakersville Baptist Church which was built near where the Mitchell School Bus garage is today. The land for the church was donated by Samuel J. Black, a Bakersville attorney whose office was in a building where today’s Southern Ridge Café is located.

About 1925, the growing congregation felt the need for a new building which they completed in 1928. The original bell as well as some wood from the second church, was placed in the belfry of the new building. The last African American resident of Bakersville, Samuel Silver, was said to have rung the bell at 10 a.m. every Sunday morning for Sunday School and stayed for services. The bell rang faithfully until 1970 when Marcus Blanton pulled the rope as usual, but this time the rope just fell at his feet. A new steeple replaced the deteriorated one, a new rope was attached, and the bell rings today.

Meanwhile, the Methodists continued to be called to worship by the Courthouse bell until about 1878 when the decision was made to build a church house. An indenture of 5 April 1879 shows that John G Heap and Anna Elizabeth Heap, his wife, sold a property for $1 to the Trustees of the Methodist Episcopal Church South, known as the “old Rorison property.”  Today, that property is on South Mitchell toward the end of the Bakersville Town Park near where the Green/Stewart property is located. The Mountain Voice published in Bakersville, edited by John G. Heap, 5 November 1880, said: “The Methodist Church is receiving finishing touches, we will next week speak in full of its architecture and the dedication services.”

The bell placed in that first church was a steel bell from the Goulds Manufacturing Company of Seneca Falls, N.Y. at a cost of about $55 (about $1,400 today). The Rorison property mentioned was that formerly owned by another successful mica miner, John Lee Rorison who was born in Fayette, N.Y. a small town just south of Seneca Falls. There might have been some connection?

In 1924, the Methodists purchased the property on which the new and current United Methodist Church sits from Matilda Wise. In 1929, the original bell called the congregation to the new church building where it rings today. That same year the Trustees sold the first property to Willard Greene.

While the new church was being built, the congregation gathered again at the new 1907 Mitchell County Courthouse where the original bell had been placed. There the bell rang to call people to court and fires such as the one in 1923 when Bakersville was almost lost. It rang to announce the end of WWI and WWII and it rings today to open many Mitchell County Historical Society programs.

From photographs, the Bakersville Methodist Church North and the Bakersville Episcopal Church appear to have had belfries; however, no information has been located concerning those historic bells if they existed.