Charlie B. and Margaret Willis Norman and Their Large Family 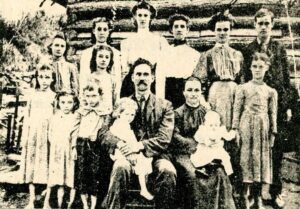 Recently discovered in the news clippings collection at the office of Mitchell County Historical Society was this photo from the Tri-County News of 2/28/1974.  The family was likely photographed 1905-1910 based on the number and ages of the children.  The article’s caption reads “A Poor Man Cannot Properly Feed, Clothe, and Educate 13 Children Without Help.”

The article stated that the couple, with 13 children in this photo, had additional children before they moved to Arkansas; “some more children were born there, making a total of 21,” all “single births,” the article said.  Despite this claim of 21 children, Ancestry and census records indicate that 15 children grew to maturity.  Charlie and Margaret lost at least one child, according to the 1900 census.

Charlie B. Norman, born 2/15/1862 in Wilkes County, NC, was the son of Anna Elizabeth Norman.  On 12/12/1884 he married Margaret Willis, born 1/15/1871 in Mitchell County, daughter of Thomas Jefferson and Nancy Jane Biddix Willis.  Interestingly, Charlie’s brother Frank married Margaret’s sister Mollie.  Margaret Willis Norman died 5/27/1920 in Arkansas, no doubt worn out by childbearing!  On 1/8/1923, in Baxter County, Arkansas, Charlie married Eliza Hale, born 1877 in Indiana.  It was the second marriage for each.

Prior to their family’s departure for Arkansas, Sally married Dock Duncan and Minnie married Will Bartlett; these older daughters lived their lives in Mitchell County.  Sally and Dock Duncan lived next door to Charlie in 1940 when he, with his second wife, was back in Mitchell County, in the Snow Creek Township; Charlie and Eliza state, however, that they were in Arkansas in 1935.  The 1910 and 1930 censuses show him in Arkansas; he hasn’t yet been located in 1920.  Charlie B. Norman died 10/24/1949 in Madera County, CA; obviously, he didn’t stop at Arkansas on his westward trek.  Youngest son Will had moved to California, so Charlie may have followed him there.  Besides the 2 girls who died in Mitchell County, 5 children died in Arkansas, 3 died in Oklahoma, 4 in California, and 1 in Montana.