The First Electric Lights for Bakersville and Toecane 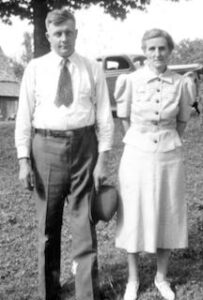 Bill Masters is credited with bringing the first electric lights to Toecane and Bakersville from energy generated by his water wheel in a 3-story mill in Toecane. According to living relatives, Bill was a voracious reader with a table in his home piled with stacks of newspapers, books, journals, and other documents. In his 68 years, he never owned a TV and the only telephone in his house was the crank type mounted on the wall. Yet he was the first in Bakersville to own a refrigerator, was noted for applying the most recent agricultural reports to his 73-acre farm, and as one family member said, “Always thinking.”

William M. “Bill” Masters was born January 7, 1892 to Isadore D. and Hattie Imogene Peterson Masters. In 1900, Bill was 8 years old and living in the Red Hill community of Mitchell County with his father and mother, Isadore D. (30) and Hattie Imogene Peterson Masters (28), his brothers Oscar (5) and Henry (1), his sisters Naomi Jane “Oma” (4) and one-month old Rissie who would die the next year. His grandfather Henry (54) and grandmother Elizabeth Teresa Jane Peterson (54) and a black servant Judge Conley (23) also lived there. His father was a farmer and his Grandfather was a manufacturer who, according to the 1890 edition of Branson’s North Carolina Business Directory, owned and operated a corn and flour mill in Red Hill. By 1910, sisters Anna, Dora Augusta, and Bessie Louise were added to the family.

For a time, Bill attended the Stanley McCormick Academy in Burnsville. This was the same school which the noted teacher, education administrator, local historian, and Bill’s cousin, Jayson Basil Deyton also attended. Bill, however, chose to leave the school and return home to work in his grandfather Henry’s grist mill. In 1910, he was living with his parents in the Red Hill community with his Grandparents now living in a separate house relatively nearby. In 1912, Bill married Cora Lee Garland daughter of Charles Wesley and Sarah Garland and continued to work with his grandfather.

There is no indication as yet as to whose idea it was to begin exploring the idea of using water power to generate electricity; however, as early as 1913 The State Journal in Raleigh indicated that “An electric light plant is also being installed in Bakersville.” In 1919, the High Point, NC Review reports that “the Bakersville Milling, Light, and Power Company of Bakersville is chartered with $25,000 capital authorized and $10,000 subscribed by R.T. Teague, C.G. Ellis and others,” including John C McBee, President.

Apparently, Bill read about Knoxville, Tennessee having lighted one area of town, Gay Street, on December 22, 1885 which then led to the formation of the Knoxville Power & Light Company. Bill contacted them and they sent a German electrical engineer by the name of Wofford to Bakersville.

During the late teen’s, Bill began building a 3-story mill in Toecane that he opened in 1920. The mill had an operating capacity of 40 barrels of flour a day. A barrel traditionally contains about 196 pounds of flour or enough for about 8 24-pound bags. 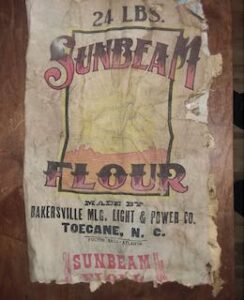 Sunbeam Flower – Made by the Bakersville Milling Light and Power Company, Toecane, N.C.

It was here that Bill installed an electric dynamo and the Bakersville Milling, Light, and Power Company of Bakersville also began generating electricity for “brave” residents of Toecane and Bakersville. The first homes were reported to have been wired by Mr. Wiss T. Wilson. The homes could only use the power between 6 p.m. and 7 a.m. when the water wheel was not being used for grain milling. Each home paid $1 per month for the service.

As demand increased with customers getting more electric appliances, Bill decided to concentrate on the success of the milling side of the business and sold the dynamo and electric system to the Northwest Utilities Company of Burnsville, which the French Broad Electric Membership Corporation purchased in 1940.

Good fortune ended on February 23, 1933 when it was reported that the Toecane frame building mill was destroyed by fire from some unknown cause. The building had been insured and Bill began immediately to rebuild a mill; however, it was no longer located in Toecane, but a short distance away where that building sits today on highway 226 just outside Loafers Glory. Albert Wilson of Bakersville was in charge of its four-story 30 X 40 foot construction as well as the new 15 foot high, 130 feet long dam across Cane Creek. The dam was 5 and ½ feet thick at the base and 3 and ½ feet at the top. The 15 foot high steel overshot wheel provided approximately 30 horsepower to operate the machinery, which was purchased from the William J. Savage Company, Knoxville, TN. The capacity of the mill was 50 barrels of flour, 5 tons of feed, and 200 bushels of meal per day.

There are many other stories regarding family and events in the life of Bill Masters that need to be told including his and Cora Lee’s dedication to the Bakersville Methodist Church, his kindness to family and friends, his firm political stand, and how he dealt with hundreds of dollar bills stuck together where he had buried them for safe keeping. It is obvious that Bill was a very special and creative person.