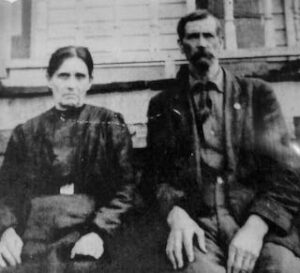 Nathan Garland was born in Bakersville on January 15, 1857. He was the son of Stephen Garland and Elizabeth Forbes. Nathan married Cordelia “Celia” Hopson in 1879. Nathan and Celia lived in the Fork Mountain township and raised ten children together as follows: Elizabeth (Bettie), Tiny, Wesley, Merritt, Mary (Polly), Texie, Jane, Garrett, Carter, and Arthur. Nathan passed on December 27, 1940 at the age of 83. Celie would follow him on April 6, 1953 at the age of 96. They were both laid to rest in the Garland Greene Cemetery. Mrs. Elsie Yelton of Bakersville, recalled an early encounter with Nathan Garland from her childhood. She originally sent her account in a letter to “Folk-Ways and Folk-Speech”, a reader-response column. Her story was later published in Thrice-Told Tales: From Rogers Whitener’s Folk-Ways and Folk-Speech of Southern Appalachia. In her own words, her story was told as follows: Old Bloody Sock “The word veterinarian was never used when I was growing up. We had one local cow-doctor and he made his rounds through each community, de-horning and doctoring cattle. I was small the first time I saw him. Paw told us to keep a look-out for him. This was the day he was expected in ‘The Flats,’ as our community was called then. “Our barn set on one side of the road, and our house set on the other side. We children went down and set down beside our log barn on some big rocks and watched for him. I didn’t quite understand what de-horning was all about. Paw had said simply that he was going to have our old cow’s horns took off. “Finally we saw the cow doctor coming up the road on his old white mare. We had been told enough about Uncle Nate Garland- just the mention of his name was enough to send chills down a person’s spine. “They got a rope around the old cow and threw her to the ground. Then the cow-doctor got out a wicked looking old saw and began sawing away at her horns. Our old cow rolled her eyes around in her head and let out a pitiful bawl. That and the sight of blood was enough for me. I took off as hard as I could and didn’t stop until I was way back of our house where I couldn’t see or hear what was going on. “But my brother stood his ground. He stayed until they got through with the old cow and let her go. But he got a scare that day that lasted until he was a grown man. All anyone had to do was mention Nate Garland’s name. Paw and Maw laughed a lot about it later. When Uncle Nate got through with the cow he wiped his hands on a bloody rag. While he was doing this he looked straight at my brother. ‘Have you been a good boy, son?’ he asked. ‘If you ain’t, I’ve got a bloody sock I stick mean boys in. Why, I even make special rounds just catching all the mean younguns and poking them in my bloody sock. I carry them off and they are never heard from again.’ “My brother had been brave enough to watch the de-horning, but now his nerve failed him. The sight of the bloody paw and Nate’s hands were too much for him. He almost had a fit right then and there. “Sometimes Maw would have to go somewhere and she would leave our oldest sister in charge of us smaller children. All she had to do to get us to mind her was to threaten putting us in the older cellar beneath our house, which was a terror in itself, all dark and spooky. She told us that Nate Garland was in there with his old bloody sock, just waiting for us. You can imagine how very little trouble she had out of us after that.” .