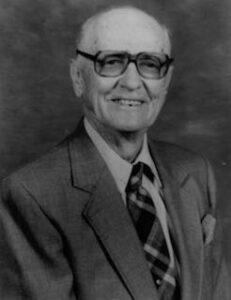 Robert Blalock Phillips was born 10/30/1902 in the Snow Hill community of Mitchell County.  He was the son of W.S. (Woodfin Squibb) Phillips (1874-1952) and Sophia Blalock Phillips (1876-1906).  He had 4 older siblings, and his mother gave birth to another child prior to her death at just 30.  R.B.’s father married again, to Lucy Westall Young of Yancey County, widow of Julius Decatur Young, and there were 2 additional children.

Florence Elizabeth Poteat (1903-1979), daughter of John Spencer and Rose Anna Greene Poteat, became the bride of R.B. Phillips on 11/24/1927, and they were the parents of 3 children, Anna Katherine, Bobby Emerson, and Marie.  Anna Katherine died at just 6 years old in 1937.  Mr. Phillips donated large framed portraits of Florence and Anna Katherine to the Mitchell County Historical Society, and they hang in the Society’s Museum in Bakersville.

Young Robert left school after 7th grade and worked for several years in sawmills and cutting timber.  With little money, he worked at the Spruce Pine Store when he enrolled in Harris High School at age 20.  He ended up being Valedictorian.  In less than 4 years he had his degree from Carson-Newman College in Tennessee, followed by 2 years of post-graduate study at UNC-Chapel Hill.

“He heard the call to teach,” according to Rick Gunter, and for 23 years he was a school principal in Mitchell and McDowell Counties.  He was Mitchell County School Superintendent for 2 years during the Great Depression, but “as a Democrat in a heavily Republican county, he found the post too political.”  The experience was not a pleasant one for Phillips, who said the job had “too little to do with what happens to the children.”  He went back to the position of principal at Harris High School.

A feature in The Tri-County News of 1/15/1959 entitled “Apple Valley – the Farm Without a Plow” described the conservation methods on Phillips’s 45-acre orchard, including grass-clover mulch, rotation grazing, and woodland restoration.  Phillips was the first in Mitchell County to grow alfalfa successfully, earning the nickname “Alfalfa Bob.”  He was the second in the county to grow apples on a commercial basis, developing a “spur-type” red-gold apple which, according to his obituary, he sold to Stark Brothers Nursery.  In 1992, R. B. Phillips was inducted into the Western North Carolina Agricultural Hall of Fame; at his induction, he was described as an “educator, former Mitchell County school superintendent and innovative farmer.”

In a piece for The State magazine, February 1993, Elizabeth Hunter referred to Phillips as “A Can-Do Man.”  She wrote that former Mitchell County Agricultural Extension head Ed Terrell praised Phillips for helping “apple growers in the area organize an apple cooperative that packed and sold 50,000 to 100,000 bushels of apples for 20 years to northern and southern markets.”

Despite having retired from education in 1954 to farm full time, Phillips continued to be a patron of schools and students.  He was a supporter of Mars Hill College and a major contributor to the Phillips-Gwaltney Child Development Center at Mayland Community College.  According to Elizabeth Hunter, he “helped needy but promising students pay college costs,” certainly remembering his own financial struggles to obtain an education.

Hunter also related Phillips’ concern about the school system relying too much on standardized testing to judge educational outcome.  “There’s no character-building or development of the thinking process anymore.  …The goal of education should be the development of wisdom, not improving test scores.”

R.B. Phillips was also a published author of 2 books.  At age 78, he was compelled, he said, to write his story of “four generations of roots in the valley, early history, autobiography, local lore, and philosophy.”  According to an Asheville Citizen-Times article (8/21/1983) by Rick Gunter upon the publication of Phillips’ first book, One of God’s Children in the Toe River Valley, “Mountain tradition and decency radiate through every page.”

“It becomes a sort of compulsion to write a book.  It gives you some kind of release.  You have to not worry about what people will think of it.  You have to get it out, forget about spelling and punctuation while you’re writing.  You can go back and correct that later” (quoted by Hunter.)

At 85, Phillips wrote his second book, Through My Picture Window, which is full of “poems, quotations, sayings, anecdotes, and bit of personal philosophy on topics ranging from education to immortality, from work to motherhood, from youth and age to forgiveness and mercy” (Asheville Citizen-Times 11/20/1988).  The book also has beautiful photographs of statuary at Brookgreen Gardens in Murrells Inlet, SC.

The life of Robert B. Phillips, which author John Ehle declared to be among the best we have in the North Carolina mountains, came to a close on 1/24/1999.  He was preceded in death by not only his first wife Florence but also his second wife, Ruth Inez Pitman Wiseman (1924-1994).  Phillips is buried in Snow Hill Cemetery.